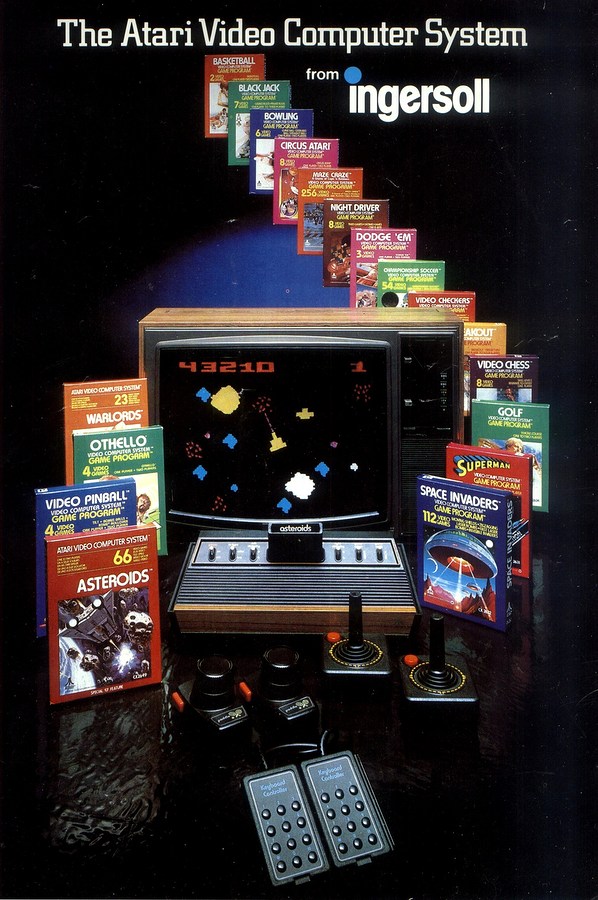 Another advert for the Granddaddy of the modern video game comes in the form of a gate-fold brochure containing a colourful list of 40 or so game cartridges. Although in appearance just a games console, the Atari 2600 "Woody" contained a cut-down version of MOS (eventually Commodore's) 6502 processor - the 6507, and a video chip - the Television Interface Adapter (or TIA) designed by Jay Miner, who ended up in a company called Hi-Toro, which became Amiga and which was bought by Commodore. The early computer industry was nothing if not incestuous. The advert also features the cartoon character "Captain Atari", from whom subscribers to the Owners' Club could expect to receive "bulletins packed with news".

Active development of the 2600 continued through unti at least 1984, when Atari was working on its Graduate keyboard which would have upgraded the 2600 in to a full computer. However, the project was canned, with Atari's marketing director Eric Salamon saying that the Graduate keyboard "hasn't been introduced because we couldn't get the quality for the price we would have to charge to make the keyboard worth buying". Atari couldn't get a big-enough software base and didn't want to be lumbered with an un-supported small-memory machine[3]. The 2600 itself wasn't officially discontinued until 1992[4] - an almost unbelieveable stretch of 15 years for a machine with a 1975 processor.