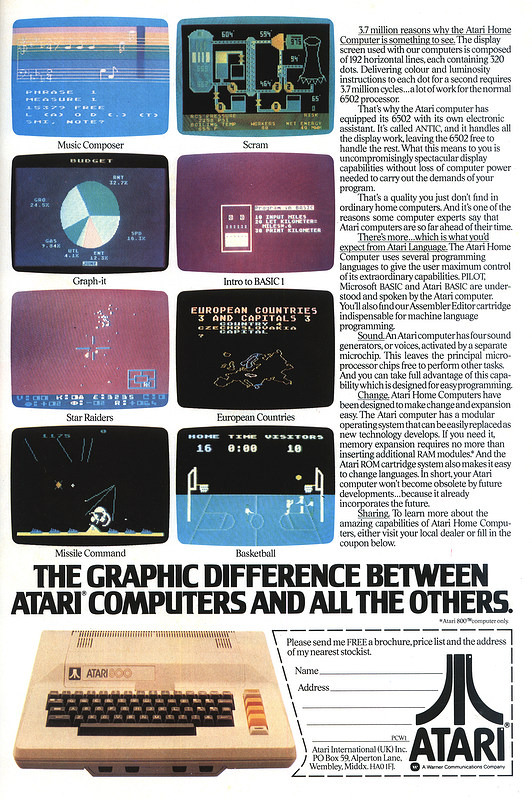 "The Graphic Different Between Atari Computers And All The Others"

The Atari 800 and its cheaper membrane-keyboard sibling the Atari 400 were the result of a project that was kicked off soon after the launch of the legendary Atari 2600 "Woody" games console. They were launched in 1978 but weren't widely available until late 1979[1] and weren't expected to launch in the UK until the end of 1980 at least[2]. Apparently, these were also the first machines to have custom-designed co-processors - the advert mentions the ANTIC display co-processor in particular. Most other micros that came after would generally follow this pattern too, such as the VIC 20 with the "Video Interface Chip" that gave it its name.

Although the quality of games available for them was said to be excellent (which they should have been, really, given Atari's game heritage), the price of both the 400 and 800 was considered, in the press at least, to be unrealistically high[3], especially given the competition that was emerging in the early 80s. In January 1982 at the Las Vegas CES, Commodore announced two new computers[4], one of which - the C64 - was not only cheaper than the Atari 800, but, being about four years newer, was better specced, not least with a 6510 CPU versus the original 6502 of the 800.

The other machine that Commodore announced was a 40-column super-VIC called Ultimax. Ultimax, later renamed The Max Machine, was launched more to gauge public opinion than as a real product. Pitched somewhere in-between games machines and a computer, with a mixed-up spec giving it the 64's high-end SID sound chip but with only 2K memory and, according to VIC-20 product manager/marketing manager Michael Tomczyk, a "horrible flat plastic keyboard", the Max was still being touted towards the end of 1982. It was eventually canned, although a significant number had been manufactured and sold in Japan[5]. The prime reason given for the abandoning the Max was the plastic keyboard, with Commodore filing a $30 million lawsuit in August 1983 against its supplier claiming that it had assembled 35,000 units which all had keyboard problems[6].

The model numbers of the two Atari machines were originally meant to imply the amount of memory each had, with 4K on the 400 and 8K on the 800. However, by the time the machines launched, the price of memory had dropped sufficiently for the 400 to be launched with 8K as well, and by early 1983 the 800 was actually shipping with 48K of RAM, up from its revised 16K. The price of the 400 had also been cut - again - by another £30 and was down to £160, in an effort to get sales moving. The 800 remained at £400, but it was hoped that its increase in memory would be sufficient to spark interest. Meanwhile, parent company Warner Communications announced that Christmas sales from its Consumer Electronics Division had collapsed spectacularly from $136.5 million for the Christmas of 1981 to only $1.2 million for Christmas 1982 - a fall of some 99%. This was, according to chairman Steven Ross, because of lower profits from video games and losses from its coin-operated arcade-games business. Stevens reckoned that the company was experiencing "an intensity of competition never before encountered", before confessing that "In a business where hits have become very important, Atari's new cartridge releases were disappointing relative to expectations"[7].

A few months before, in the summer of 1982, Atari also announced that it had signed a deal - rumoured to have been a £1.5 million advance on royalties[8] - with Merchandising Corporation of America in order to produce computer games based on Stephen Spielberg's new film ET: The Extra Terrestrial. Atari's software manager, Graham Daubney, said "The games will use the ET characters and we hope to see them shortly after the film's launch at Christmas - definitely in the first quarter of 1983"[9]. The saga of ET the game was one of the greatest ever in computer gaming, with the final game being considered so bad that Atari took every unsold copy and buried them as landfill in Alamogordo, New Mexico. Rumours of the great dump persisted for years and were eventually proved to be true when the original dump site was re-discovered. The fiasco meanwhile helped Atari record a quarter loss of $310 million in 1983[10].