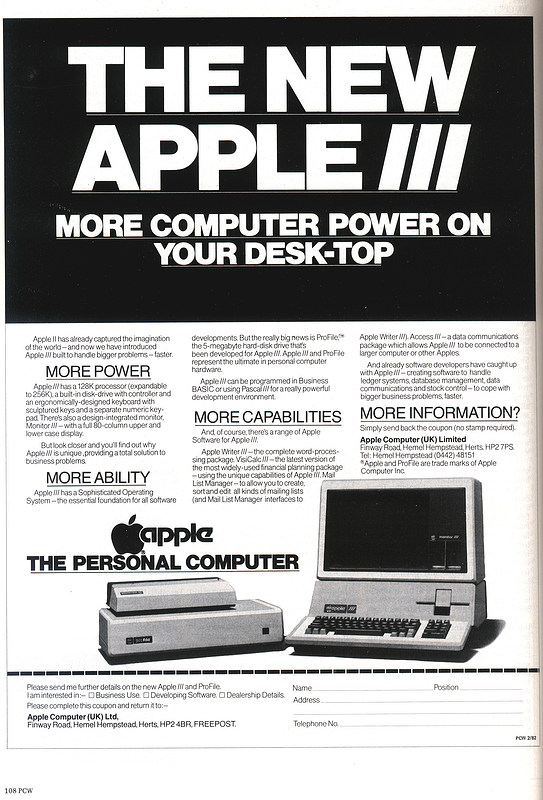 "The new Apple III - More computer power on your desk-top"

This would seem to be the "missing link" Apple computer, as the world and popular culture seems not to register anything about it, and Apple's own history seems to skip from the Apple II to the Lisa or the original Macintosh of 1984 Superbowl advert fame. But here it is - the Apple that time forgot. Although it apparently only sold 65,000[1], it did, at least briefly, feature in the Personal Computer News "Top Ten over £1,000", coming in at number 4 in the chart of September 1st, even though at £2,780 (£9,580 in 2021 money) it was the most expensive on the list[2]. It ran "SOS" (Sophisticated Operating System) on a 2MHz Synertek 6502A CPU and as such was a development of the Apple II, although officially it was always claimed that it was a "cousin" of the Apple II line. This was still an 8-bit CPU in the era of 16-bit machines like IBM's 5150 - the IBM PC - which would soon sweep away almost every other machine around. In an interview quoted in May 1982's Personal Computer World, Steve Jobs expressed the opinion that "people who are chasing 16 bits and more memory are in the wrong race; that software design is the key to the future"[3]. Perhaps its biggest failing was that, in Apple terms, it was frankly ugly. It 1982 it was retailing for £2,545 - about £9,520 in 2021 money, which, despite the machine reviewing well, was thought to be just too expensive for the UK market. After it flopped, Apple was subsequently forced to refresh the ageing Apple II line with the Apple IIe.