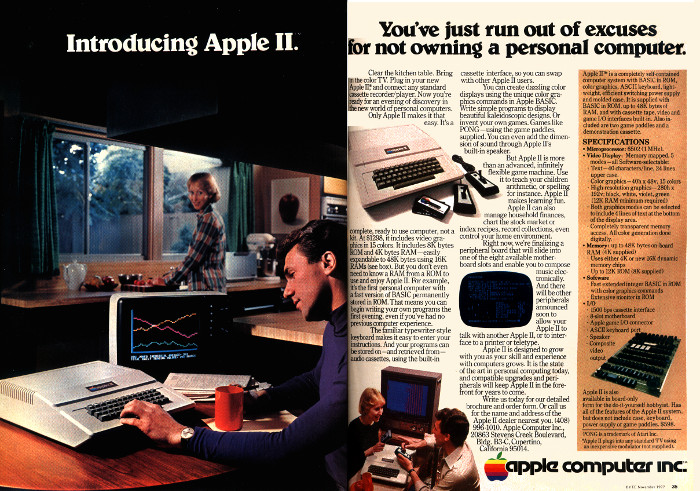 The Apple II was one of the "1977 Trinity" - the first three true personal computers ever, which launched on to the market in that year. The Trinity also included the Commodore PET and the TRS-80. The PET was actually first, being demoed several months ahead of the rest at January's CES, and the West Coast Computer Faire which happened in San Francisco in April, whilst the Apple II wasn't formally announced until 5th June 1977.

In common with the PET, the Apple ran MOS Technology's 6502 CPU, but it had a hi-res 280 x 192 pixel colour display and could also be plugged in to a regular TV, like the TRS-80. It also had BASIC stored in ROM - the PET did this too, so Apple's claim that that feature was a "first" is a bit bogus. The Apple II was also expensive - the 4K model sold for £995 in the UK, which is about £7,030 in 2020 terms, and that was without a monitor, whereas the 4K PET launched in the UK in 1978 for £700 (£4,240). The Apple II struggled at first, although by early 1978 about $3 million worth had been sold, which was enough to allow Apple to move into a proper factory. The real boost to its fortunes came with the release of Visicalc, the spreadsheet software which unintentionally propelled the micro into "must have" territory. Visicalc, which had cost £200,000 to develop, debuted in the UK at the beginning of 1980, where it retailed for £95[1], or about £460 in 2020.

The ability to plug in to a television delayed the launch of the Apple II into the UK as the company had to design a new colour card which would be compatible with the European PAL system. According to Practical Computing, this project was "not exactly rushed"[2].