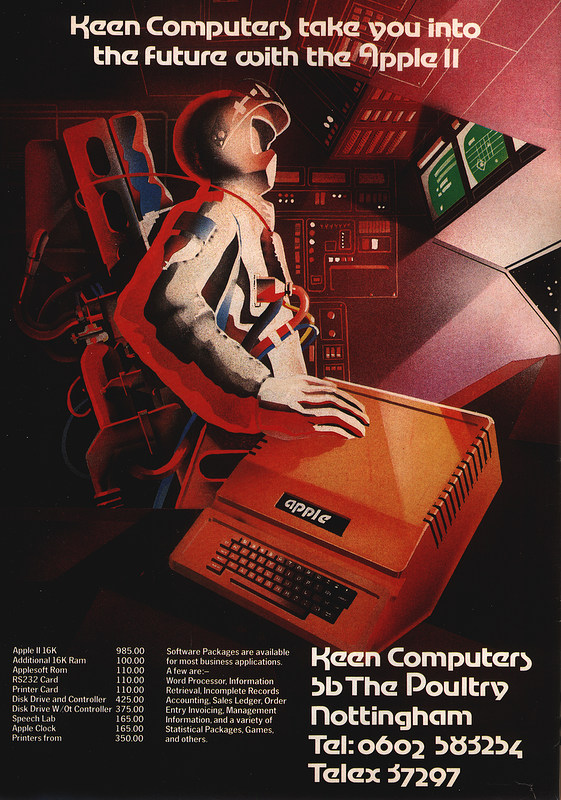 "Keen Computers takes you into the future with the Apple II"

A third-party advert for the Apple II, one of the "1997 Trinity" of computers that changed the landscape of computing. Apple, true to form ever since, were the most expensive of the three - this 16K model retailed for £985, or about £5,520 in 2020 terms. And that was without a monitor.

At this time, Apple was vigorously competing against its US rivals: Tandy had the benefit of their large existing Radio Shack shop network and Commodore had their calculator outlets, so Apple countered by flooding the market wherever and with as many machines as they could. This pushed Commodore's PET down to third place in the sales race in the US (The TRS-80 was number one) but this left few computers for the UK - supplies were sporadic and the machines were especially overpriced. Also, several suppliers were vying to be "number one supplier", including Tim Keen, who ended up complaining about lack of machines directly to Apple. Supplies were so bad that another distributor - Mike Sterland's Personal Computers - had around 40 gutted Apple II's in their warehouse as they were the only source of spare parts. Eventually, the various disputes between distributors were settled and Apple planned to increase shipments to around 1,500 per month[1].

By the latter half of 1979 however, Keen faced additional competition when Microsense entered the market as a third dealer. It was thought that Keen could "no longer delegate the bulk of sales to sub dealers and collect a small percentage" of every machine sold. Dr. Tim Keens' company became the subject of rumour with speculation that it might even go bust, however the company responded by expanding its market by taking on the Corvus Winchester disk and Commodore's PET. It was intending to keep the Apple in its "up market" slot whilst having the PET as a "useful source of volume sales" - the machine was the best-selling micro in the small business market[2].