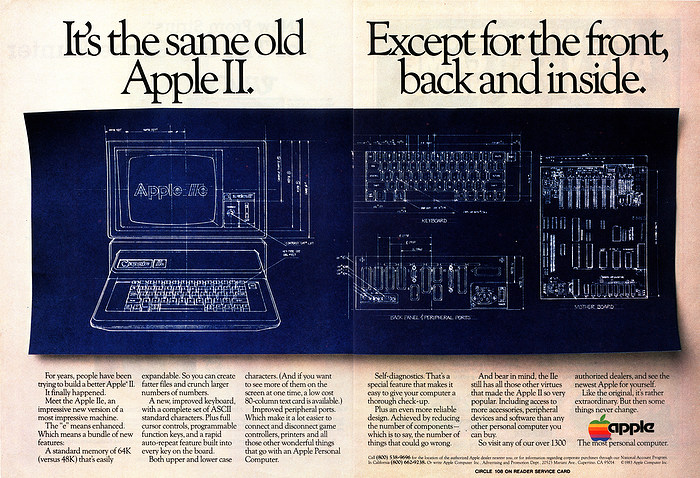 It's the same old Apple II, except for the front, back and inside

The Apple III, which had been released three years before in 1980, had been a relative failure, shifting only 65,000 units before it was canned, so the venerable Apple II line was continued with this revision. It had an upgraded keyboard and several components and features that had previously only been available as add-ons such as lower-case characters, but was still running the legendary (vintage 1975-designed) 6502 processor at just over 1MHz. It came with 64KB of memory, which ended up being expandable to over 1MB with third-party add-ons. Although its processor was more-or-less the same as the original Apple II of 1977 (or even the Apple 1 for that matter), at least the advert's line that the insides were different was borne out by the fact that the Apple IIe had a chip count of 31 compared to previous incarnations with a chip count of 120.

In late 1984 Apple announced a possible successor to the IIe in the shape of the Apple IIx. This was to feature an updated "6502" called the 65816. Designed by Com Log and Western Digital, the chip was a sort-of follow up to the 6502 in the same way as Motorola's famous 68000 was a follow-up to its 6800, upon which the 6502 was loosely inspired, designed as it was by ex-Motorola engineer Chuck Peddle. Peddle developed the 6502 at MOS Technology which had been bought by Commodore in 1976. Peddle then left Commodore to start Sirius with Chris Fish, former Commodore financier, leaving the 6502 behind without a natural successor - Commodore founder Jack Tramiel having apparently fired those at MOS who were trying.

The 65816 was like Intel's 8088, as used in the Sirius, in that it was a 16-bit processor with an 8-bit data bus. However, it could address 312K instead of the 64K that the 6502 could handle, and so it was thought it might squeeze a couple more years life out of the Apple II[1]. Unfortunately the IIx wasn't due out until July 1986, long after the Apple Mac had sucked up all of Apple's sales and attention, so the IIX never saw the light of day and was cancelled in March 1985[2](this reference states March 1984, but Personal Computer World in January 1985 was still writing about it in the future tense).