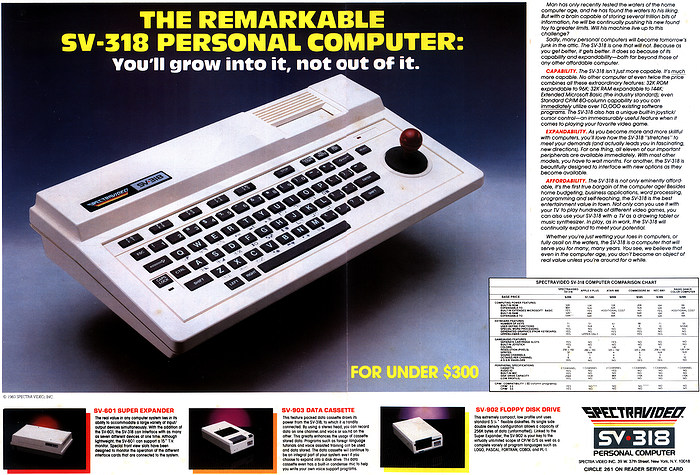 The Spectravideo SV-318 was a Zilog Z80A-based computer with 32K RAM and Microsoft BASIC, which had been the de-facto standard on pretty much every computer since the MITS Altair of 1975. It retailed for $299, or about £680 in 2021 terms, and had a chiclet keyboard with an unusual built-in joystick which could be removed for 4-way cursor use. It was also "almost, but not quite, an MSX machine[1]". The main reason for this was that, although Spectravideo claimed that the SV-318 was the UK's first MSX-software-compatible computer, it had a different cartridge slot which was incompatible with the MSX standard[2]. This wasn't entirely Spectravideo's fault, however, as the MSX specification was changed after the 318 had been designed[3].

The SV-318, and its sibling the SV-328 had been moderately successful in the US, but when they were launched into the UK during the week of 3rd November 1983, they didn't generate much interest or attention. The timing was somewhat unfortunate as it meant that Spectravideo missed the bulk-buying season for the Christmas period, when all the High Street chains sorted out what they were selling, and the machine's peripherals were said to be expensive - the machine, like Commodore's VIC-20 and C64, required a dedicated cassette player at a similarly expensive £44.90[4].

MSX was a standard for hardware and software backed by Microsoft along with (mostly) Japanese manufacturers like Yamaha, Sony, Sanyo, Fujitsu, Canon and Toshiba and was officially launched in June 1983. Judging by the presence of magazines like "Woman's Own" and "Options" at the UK launch in September 1984, it appeared to be aimed at a similar market to that which many MSX participants were used to - hi-fi, washing machines and video recorders (as Personal Computer News noted drily in its September 29th issue). Many MSX machines didn't make it to the UK until November of 1984 - seven or eight months after MSX was originally meant to have landed in the UK - and some manufacturers were even holding out until spring of 1985, apparently in order to ensure supplies were available to satisfy "the expected demand". Ultimately, neither the Spectravideo (a machine described as "ill-fated") nor the MSX standard fared particularly well, which was a relief to incumbent manufacturers as many of them had been terrified of a Japanese invasion since almost the start of the home computer revolution in the late 1970s. The 1984 timing was rather unfortunate as it was a period described by Tony Smith of The Register as a "sales wasteland"[5] and was the beginning of the end of the home computer boom in the UK.