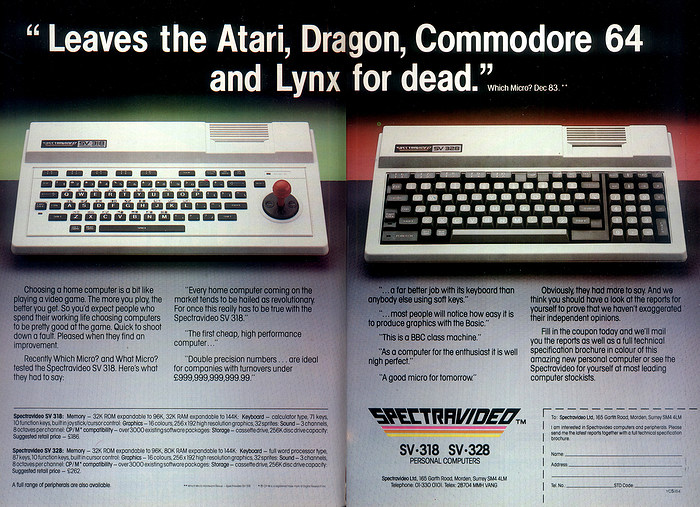 Spectravideo: Leaves the Atari, Dragon, Commodore 64 and Lynx for dead

Another advert from SpectraVideo, the company (formerly known as SpectraVision) which had started out making games for the Atari 2600, Colecovision and Commodore VIC-20. It shows their first machine - the SV-318, which was claimed by the company to be the first MSX computer, even though it had an incompatible cartridge slot[1] as well as their second, the SV-328, which was basically the SV-318 with 80K RAM instead of 32K and a proper keyboard. The improved version retailed for £262 - about £860 in 2021 money.

The incompatibility of the cartridge slot could be fixed with a £30 adapter (£98 in 2021), but there were also differences between SV's BASIC and standard MSX BASIC. Before these differences became widely known, Spectravideo had actually been mooting a price rise of 3-6% from the original price of £302 (for the 318)[2], in what would have been a highly unusual and bullish move at a time of fierce competition and price wars.

When the SpectraVideo launched, fifteen companies were already signed up to the MSX standard. SpectraVideo were at the time the only non-Japanese company involved, with the rest of the list reading "like a directory of Japanese electrical companies": Canon, Fujitsu, General, Hitachi, JVC, Kyocera, Matsushita (Panasonic), Mitsubishi, NEC, Sony, Pioneer, Sanyo, Toshiba and Yamaha. Proposed by Microsoft, MSX was an attempt "to bring the standardisation of the record industry to the computer market". It was thought that this would solve all sorts of problems like finding shelf-space for software in shops to reducing research-and-development costs for peripherals, although it was also thought that such commonality between machines might even exacerbate the problem of software copying - once all machines were essentially the same, that could become much more of a problem[3].