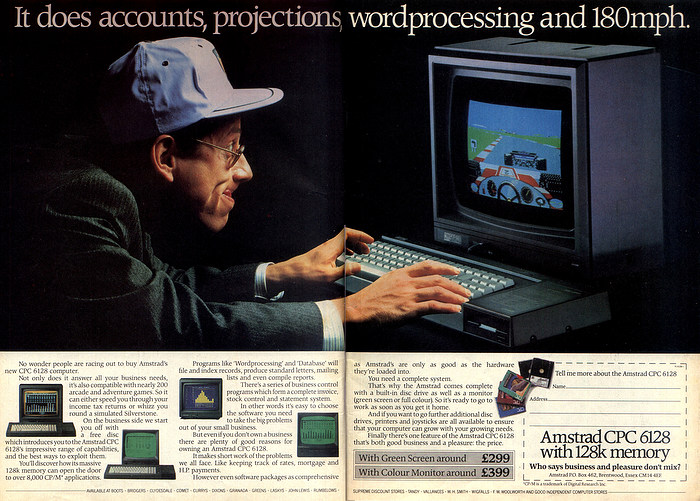 It does accounts, projections, wordprocessing and 180mph

Only months after Amstrad had released the CPC 664, it was back with an entry in the battle-du-jour which by late summer of 1985 was all about 128K micros. Whilst not really offering much extra over 64K 8-bit machines, there was still something of a brief revival in the micro market - or at least a surge of interest - as several other 128K machines had been released recently, including the Enterprise/Elan (albeit 18 months late), Sinclair's QL (also known as Quite Late, because it was) and Commodore's CBM 128. The presence of Commodore's 128 - out in the US and due in the UK in Autumn at about the time of this advert - and the threat of a Spectrum 128K were thought to have been the reason that Amstrad rushed out the 128 only months after its CPC 664, an action which certainly generated some anger as Amstrad swiftly abandoned the earlier machine and wouldn't offer upgrades, plus the new CPC 6128 was not directly backwards-compatible[1]. Even as late as 28 days before the launch of the 6128, Amstrad was denying that it had any plans for a UK launch, suggesting that the machine was intended for the US market only and that the 664 would not be dropped. When the bomshell went off, Amstrad's William Poel - who had once offered to eat an Amstrad micro in Trafalgar Square if one of the company's announced machines was late[2] - helpfully suggested that "Amstrad never announces a product before it is ready". He went on to explain why the company was telling people who telephoned to check that the 664 was still going by saying that "It is entirely possible that the person on the phone did not know of the policy to bring over the 6128. Amstrad is a large company and there are employees who don't even know we produce computers at all"[3].

Several dealers and retailers were caught out with high-ish stocks of the 664, whose price was higher than the 6128 that replaced it. Rumbelows was one of those affected, however the company's Terry Greenwood said "Our stock levels are not high" before saying that "We have no idea what we will be selling [our remaining] 664s for. We won't be re-ordering the machine - I'd be surprised if anyone did. Amstrad is probably fully aware of the consequences of selling the 6128 at that price" - with "that price" being the same as the lower-specced only-just-released 664 that no-one would want to buy any more. Boots and Laskys had never stocked the 664, whilst the latter - along with Selfridges - was already selling the 6128. Retailer G&B was also selling the 6128 and had taken ten of each version in its first order which "All sold out within a day. They are proving very popular"[4]. Back in user-land, Personal Computer World reported one of the calmer letters it had received about the situation which said "it [was] unbelievable that a company trying to enter the education market should have such a slap-dash approach to sales and customers". Ironically, all this happened at a time when Alan Sugar - said by Popular Computing to be Brentwood's answer to Jack Tramiel[5] - was appearing on television saying "We know how to look after our customers"[6].

However others were only too quick to praise Amstrad's customer support in other areas. In a letter published in December 1985's "Your Computer", Steve Williams of Twickenham recounted a poor experience getting through to Sinclair to query a problem with the ZX81's ROM, an ultimately fruitless process which took several days and many un-answered phone calls. After purchasing a CPC 6128 and contacting Amstrad about a problem running a 464 program, Steve got through first time and was put on to one of their "boffins", Cliff Lawson. "He said 'oh yes, there is a problem, I'll sort it out tonight at home and phone you with the solution tomorrow'. And guess what... he did!"[7].

Referred to as "Amstrad's battering ram" by Your Computer in September's issue, it was pointed out that 128K wasn't really a lot of use to BASIC programmers, as 8-bit processors only had 16-bit memory registers which could address up to 64K without complicated bank-switching operations - which were often only available in machine code - but it would make a difference in allowing proper CP/M to run. This gave the machine real "business" credentials, and potential access to hundreds of business applications. The review concluded that the 6128 was exceptionally good value, where adding a printer bought the price up to only around £500, or £1,560 in 2021, the monochrome-monitor version was only £299/£930 and that the 6128's BASIC was still superior to most other home computers on the market plus it came with a floppy disc drive[8]. The only real competition at the time was seen as Commodore's CBM 128, which even though it lacked a bundled disk drive and monitor and was still expected to retail for £270 (£840), trounced the 6128 in the availablility of games, having around 6,000 titles available thanks to its C64 mode[9]. The review rounded off by saying that "[The CBM 128 and Amstrad 6128] probably represent the final flowering of 8-bit micros, a species now reaching the end of its term". That said, the CPC 6128 was still being advertised in April 1987's Personal Computer World, some one-and-a-half years later (which is equivalent to a whole geological epoch in Amstrad terms), at a time when Amstrad's own IBM-compatible PC 1512 was in the market[10].

The three companies - Amstrad, Commodore and Atari - were the only micro companies to exhibit at 1985's summer CES, held in Chicago, with Amstrad officially launching the 6128 into the US, which it initially suggested wouldn't be available in the UK until 1986[11], and Commodore showing the 128 instead of the Amiga - the machine everyone really wanted to talk about but which wouldn't appear in the UK until the summer of 1986. Commodore's new president, Marshall Smith, brought in by chairman Irving Gould after a boardroom bust-up saw founder Jack Tramiel resign at the beginning of 1985, was wary of Amstrad, saying in an August 1985 interview (with a hint of Napoleon Bonaparte) in Commodore User that "I want to go over to England and talk to some people, shop keepers and users about that. I think Amstrad will be our main competitor in Europe this Christmas". He also said of erstwhile contender Clive Sinclair that "He seems to be something of a folk hero in the UK, but it looks like he's stubbed his toe with the QL"[12].

Amstrad was particularly canny with its moves into the US - whereas Acorn had financed its own moves into the States, at a cost to it of some £8 million, Amstrad was not financially involved in its US distribution at all, leaving that to a new Chicago-based company set up by Amstrad's Madrid-based distributor Indescomp SA. The launching of the 6128 at CES was unusual for Amstrad as, according to the company's William Poel, it "somewhat perverted Amstrad's usual principle of not showing anything until it's ready". The reason was to get machines in shops by Autumn, as part of its deal with enormo-retailer Sears Roebuck[13].

The 6128 seemed to be popular before it had even been launched, as several software houses including Infocom and Kuma, which had written some of the very first software for Amstrad, had already expressed an interest. Even Rumbelows, the famous High Street TV rental and electricals retailer, was getting in early - despite having been mildly burned by the 664 - with a spokesperson saying "Amstrad machines sell well and are very reliable. We are closely considering machines like the 6128. Although I have only seen it at the show it would seem to be the sort of machine that would appeal to people who have bought machines from other companies, as well as Amstrad micros"[14].

At the very end of August 1985, Amstrad had officially announced that the CPC 664 was finished, with chairman and MD Alan Sugar saying "The 664 is now well and truly dead. It was a natural progression from the 464, but it suffered from a leap in micro technology"[15]. The company also launched its hugely-significant P‍CW 8256 word processor at about the same time - a machine which would go on to sell 8 million units.

Although Amstrad fairly ruthlessly abandoned the machine, several third party companies did release various upgrade kits that could turn a 664 in to sort-of a 6128. At the Amstrad Computer Show, held at the Novotel in London between the 5th and 6th of October, DK'tronics was showing off its memory upgrades for the 664 and even the 464. Neil Rawlinson of DK'Tronics said of his company's 64K module that "Any software using bank switching and system calls should work - but not those with Basic commands as there are no ROMs"[16]. That's useful, then.

Meanwhile William Poel, who had originally set up Amsoft in order to drum up software for the CPC range of machines, left Amstrad to become Managing Director of CP/M software house New Star, which he had bought, saying "My job at Amsoft was basically done. Now I intend to do everyone a favour by concentrating on around ten CP/M products which provide what people really need for their Amstrads". Poel was also keen to drive down the cost of CP/M software, suggesting that around £49, or £150 in 2021, "seems to be the best price point". He continued "I am putting all my eggs in Amstrad's basket, and I have total confidence in Amstrad continuing to produce mass-market machines"[17].