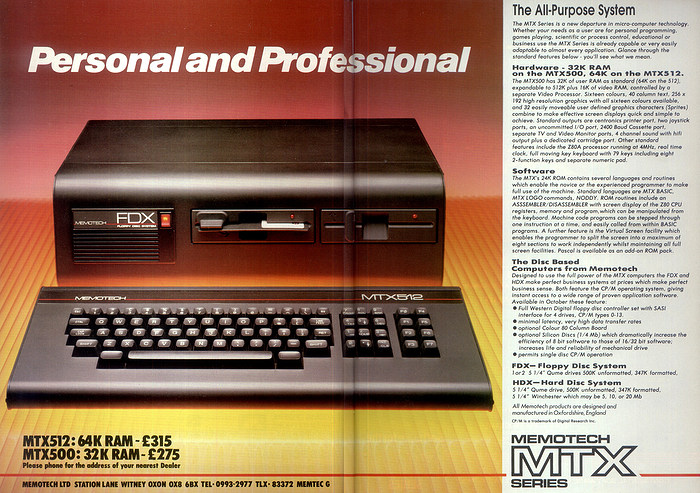 The Memotech MTX500 had been launched during the previous summer at the Earl's Court Computer Fair in June 1983. It was a little unusual in that it launched with a lot of expansion potential in mind, offering as it did up to 512K RAM, 80-column video, 5¼ and 8" floppies, Winchester drives and up-to 1MB solid-state disks. Also planned right from its launch was an 8-station "Oxford Ring" networking system as well as a 16-bit processor. Popular Computing Weekly summed it up as being expandable "more or less indefinitely [up] to a system costing £45,000"[1].

The MSX500 was also one of a few "nearly, but not quite MSX" systems floating around during this period, like the ill-fated Spectravideo SV-318 (which was apparently considered as an MSX "beta" machine[2]) or the Sord M5. It had the same 64K RAM (on the MTX512 model), dedicated video courtesy of a TI 9928[3], a Zilog Z80 CPU and a standard Microsoft BASIC (also available were MTX Logo and, unusually, an assembler/disassembler). However, although all of the MTX's hardware and software was close to the MSX Standard, it was not exactly compatible.

It was fairly unusual in being constructed out of brushed black anodised aluminium and the design of its FDX disk unit seems to set the template for many of the beige boxes of the 1990s, in particular Dell's Optiplex workstation range from around 1999. The advert is therefore somewhat deceptive as the MTX computer itself was all in the keyboard - the big box behind it in the advert is the FDX floppy disk drive and controller unit. In addition to its MSX-ey features, it also had a primitive BASIC windowing system, allowing the programmer to split the screen in to a maximum of eight separate sections. It could also run a fair number of Spectrum games, once the "Speculator Rompak" had been released some time in 1985[4]. This sort of ability was something that several other computers managed, for instance a Tatung Einstein could similarly run Spectrum software with an add-on. The MTX512 retailed for £315 - about £1,030 in 2021 terms.

A Memotech MTX500 (the cheaper of the two models) was available as a competition prize in February 1984's "Your Computer". According to the magazine, the MTX500 had made a real impression when it had been received for review in the November of 1983. They wrote: "When everyone else seems to be fighting to produce the cheapest computer with both colour and sound, Memotech has taken a very different approach. Leaving its ZX81 beginnings far behind [Memotech started out producing high-quality memory and expansion cards for Sinclair's ZX81] it has produced a computer that would not disgrace any executive's desk. The cost is £275[5]" (about £900 in 2021).

Memotech managed to avoid a bit of an Osborne moment as it announced its updated 64K MTX512 machine before the MTX500 had even gone on sale. Both machines were subsequently launched in the October of 1983, with the MTX500 being a month late[6].