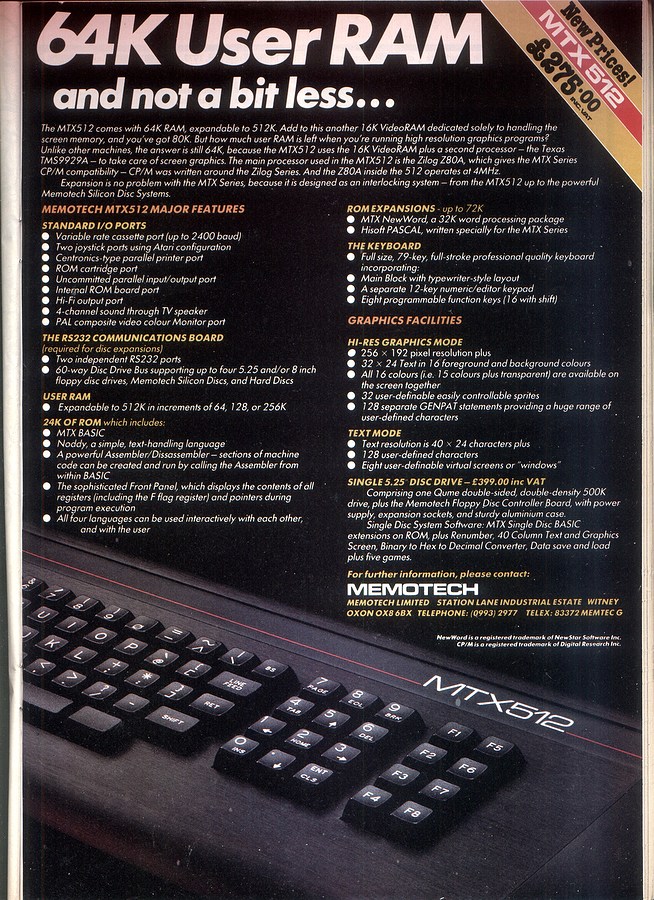 Here is an advert from Memotech for its MTX512, which seven months after its release was down to the price of Memotech's previous entry-level model MTX500 at £275, or about £900 in 2023 terms - with no mention of the older model being made. There's no change to the specs otherwise - the MTX512 could be upgraded to 512K RAM, hence the name, and came with MTX BASIC, Noddy (a text processing language) and an assembler/disassembler. Hidden away is also a reference to "ROM expansions" which was the capability that many older machines supported, like the Commodore PET or the BBC Micro, where software could be made permanently resident by plugging in actual ROM chips on to the motherboard. Here, Memotech was offering MTX NewWord, a word processor, and Hisoft Pascal in what may have been the last time software was offered in this way.

In 1985, Memotech was snubbed, along with Acorn and Sinclair, when the USSR placed its first major order to equip its schools with micros with the MSX consortium, despite Memotech's machines being almost MSX. All three companies had been keen to get access to the Russian market, thought to be worth around £200 million, when the US declared it was easing its COCOM restrictions on trade with the Soviet Bloc. The three companies had first pitched their micros at the ten-day-long Technobuch '85 exhibition in Moscow, with Sinclair actually selling the dozen Spectrums on its stand to the Russian Ministry of Higher Education. Sinclair had been "optimistic about [its] chances of penetrating the Russian schools", and that whilst the company didn't have any actual orders yet, its European business development manager Jan Tyszka was going back to Russian for more negotiations. Acorn also had some success, winning a £20,000 order from the Moscow Education Institute with its Cyrillic-modified BBC Micro. Memotech however was less successfull, failing to sell any machines at the show as it had not acquired the necessary export licences in time[1].

Memotech's Jeff Wakeford was somewhat pragmatic about the failure to win the big contract saying that "The Russians did say they wanted 10,000 machines for this year to get their educational programme going, so this deal means Memotech did not get the initial order. However, they have asked us to go back to the Soviet Union with the Memotech micros in August, so at least they're still interested"[2].

By September 1985 Memotech was clearly in trouble as it was forced to slash the prices of its two MTX computers, with the 80K MTX512 seeing a price cut of £70 down to £130 and the 48K 500 model retailing for a paltry £80. Despite the savage price of its micros, the company also released some new hardware, with its range of disk drives, which optionally included CP/M. Mind you, that came at the hefty price of £549 for the 1MB floppy-CP/M combo, or about £1,720 in 2023 money. Also released at the same time was Memotech's Spectrum software emulator - Speculator - for £30. The emulator came with special tape-loading software for 20 published Spectrum games, but not the actual games themselves. The company was expecting to release more loaders in future, although it had some way to go to provide enough for the many thousands of Spectrum games now on the market[3].

By the spring of 1986, Memotech was in receivership after its financial backers pulled out, although it was maintaining its hardware and software support helpline. Despite the setback, the company was nevertheless expecting to launch a new micro during the year and was intending to regroup as a new company - Memotech Computers - run by Jeff Boyd, a co-founder of the original Memotech, following a six-week stock-checking and handover period[4]. A spokesman for Syntaxsoft, a company which had worked closely with Memotech, reckoned that "they will be trading again from April 1st". As Popular Computing Weekly pointed out, "If [Memotech and Tatung] can cash in on the revival of the CP/M operating system, they stand some chance of creaming off some of Amstrad's small-business sales"[5].