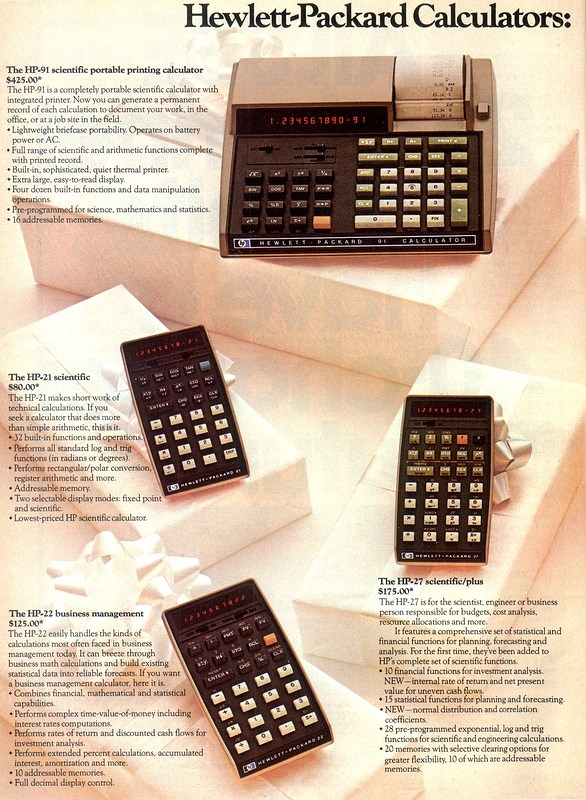 The first half of the 1970s was something of a boom time for calculator manufaturers. The machines were something of a novelty and were often staggeringly expensive - often costing a week's wages or more. They were often referred to as "portable computers", rather than just calculators, even though they didn't become properly portable until around 1973. The first "pocket" calculators, like the Bowmar "Brain" or the rebranded Commodore C110 appeared in 1971[1], but it wasn't until machines like Sinclair's Cambridge or Commodore's Minuteman 3 series appeared that calculators could fit in actual shirt pockets.

A few years later, calculators would provide a path of natural progression to the manufacturing of computers for several companies, including Hewlett-Packard. Commodore was another that followed this evolutionary trail, coming from office equipment manufacturing, moving on to adding machines and then into calculators in 1970 before launching the world's first "modern" personal computer - the PET - in 1977. Hewlett-Packard, on the other hand, came from a background of test equipment, instrumentation and medical electronics and saw calculators as something their customers could use instead of slide rules. Both companies managed to ride out the calculator wars of the middle 1970s, a financial bloodbath triggered by Texas Instruments' move in to the industry. TI had been a supplier of calculator logic chips for years, but started producing their own calculators and selling complete machines for less than they sold the chips to everyone else. Few companies survived, but HP did and they continue to manufacture specialist calculators to this day.

Meanwhile, the advert features a good selection of HP's 1976 line of calculators, from the $80 HP-21 scientific, right up to the staggeringly-expensive HP-97 - yours for $750. Even now, that would be a lot of money for a calculator, but it works out at around £4,090 in 2021 money - more than a reasonable second-hand car. At least the HP-97 offer "about 3.4 times the programming power" of the older HP-65, so it's totally worth it then.