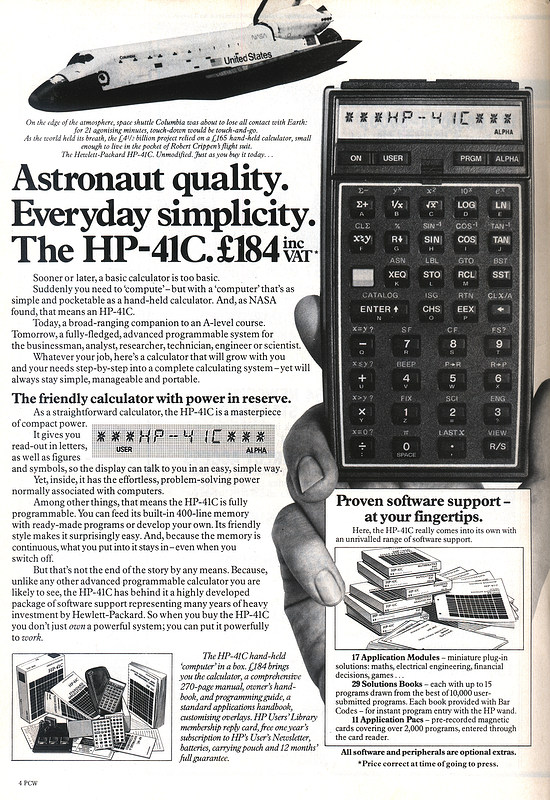 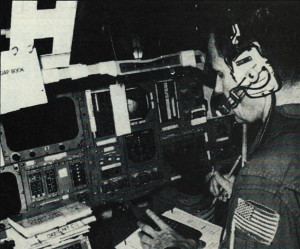 An HP-41C in use on NASA's Shuttle simulator, © Personal Computer World, January 1983Hewlett-Packard, like Commodore in the 1970s, was also a calculator manufacturer. This particular model used Reverse Polish Notation, where the sum 2+2 would be entered as "2, 2, +", plus it was the first to offer an alpha-numeric display[1]. It was also truly programmable in the computer sense, with its 400-line memory, comparison operators and statements like "goto" and "return". And perhaps it should also have been able to make the tea, as its price of £184 is an eye-watering £680 in 2021 terms.

HP's market was very much the big corporates and it was not truly interested in the consumer market, where price was far more sensitive. This was noted by Adam Osborne of Osborne One fame, who in an interview with Practical Computing in January 1983 suggested that "HP sell quality and service to a market that is not particularly price-sensitive. Their customer base had been large corporations who want to make sure that the thing is reliable and does the job it is supposed to do. They still sell most of their calculators, and everything else, to large companies. And large companies, quite honestly, are not price sensitive"[2]. This can't have been that far off the mark, as HP had shifted over half a million HP-41C calculators by the end of 1982[3]

The "Astronaut quality" in the advert refers to the 41-C's use on the Space Shuttle, where it had been pre-programmed "to help with several duties, including manual maneuvering of the spacecraft in an emergency and calculation and adjustment of the Shuttle's centre-of-gravity prior to re-entry"[4].

The HP-41C had been heralded, as many scientific calculators at the time were, as a "pocket computer", although Vincent Tseng of Practical Computing seemed to disagree with this comparison in a review published in January 1980, saying that "any claims to being a computer cannot be justified, since the [Texas Instruments] TI-59 matches almost point-for-point the capabilities of the HP-41C and the TI-59 has always been regarded as a calculator. However it is nevertheless a significant step towards the pocket computer"[5]. In its defence, it did come with a whole range of peripherals, like a computer would, such as memory packs, a bar-code reader and even its own printer.