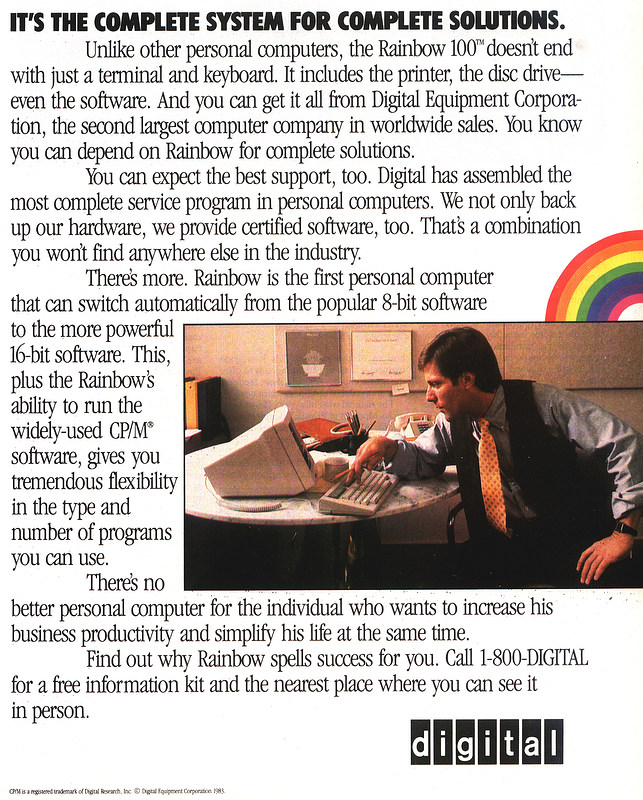 "Rainbow 100 - It's The Complete System for Complete Solutions"

No collection of adverts about the early computer industry would be complete without at least one featuring Digital (or Digital Equipment Corporation - DEC). This was the company that built not only the well-known VAX range of minicomputers, but also the legendary DEC PDP-11 - the computer that the first Unix was written on, originally in the machine's own native PDP-11 Assembly language. This particular advert is for the Rainbow 100 - a hybrid machine that was part VT-220 terminal, part 8-bit Zilog Z80 CP/M machine and part 16-bit Intel 8088. These types of machine were not uncommon at the time. They acted as "gateways" - gently progressing users from the old 1970s world of 8-bit computing (often in CP/M or even BASIC) to the shiny, relatively new world of 16-bit computing and the soon-to-be almost total dominance of the IBM PC format and Microsoft's MS-DOS. The machine was also unusual in not just supplying 8- and 16-bit CPUs but in being able to tell the difference in which sort of disk had been inserted and running it on the right processor - Z80 if a CP/M program was loading and the 8088 if it was something 16-bitty, like CP/M-86 or maybe MS-DOS[1].

The Rainbow, which was finally launched at least nine months after it was announced[2] had its fans, not least of which was Guy Kewney of Personal Computer World, who questioned why the world went wild about IBM's 5150 when there were several reasons to go wild about the Rainbow. Retailing at about £2,400 (£8,270 in 2020), it was one of the cheapest 16-bit machines on the market, although Kewney was less impressed with the pricing policy for extra memory. There were also questions about the choice of the unknown CP/M-86/80, which combined 8- and 16-bit operations, as well as the "pretty, but non-standard disks". However, he rounded off by saying "By the end of the year there will be people buying things like standard 9100-bus CP/M boxes instead of Rainbows, but I can't think why. I suppose it will all be due to DEC's carelessness in failing to put the ninth, second and thirteenth letters of the alphabet on the box"[3].

The Rainbow was ultimately a failure, with David Ahl writing it up as a disastrous foray into the personal computer market and saying it was "over-designed, late, not IBM compatible, expensive and poorly-distributed". DEC did try to make a comeback in 1985 by launching a desktop version of its VAX 11. Called the Microvax II, the machine retailed for $20,000 - about £41,800 in 2020 - but could at least support up to 16 users at about 90% the performance of a full-size VAX. DEC also achieved something of a milestone when it released the first commercial version of a CD-ROM system, with its 600MB read-only optical disk system retailing for $2,195, or about £4,590 now.