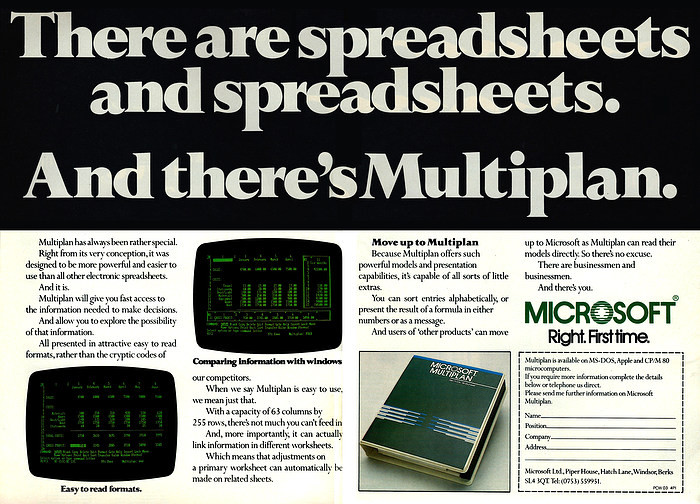 My own 150x150-cell business model Multiplan spreadsheet print-out on the wall above my desk at Soman-Wherry Press, Norwich, in 1988. It was created on the Wang Professional PC next to it.Multiplan was part of the wave of spreadsheet software that followed on from the release of Visicalc for the Apple II in 1979. It had been written in such a way that it could be easily ported, and so appeared on machines as diverse as the Burroughs B-20 and Commodore 64, as well as the Apple II and regular MS-DOS PCs[1]. Proving that Microsoft didn't always have things its own way, Multiplan never managed to best Lotus 1-2-3, which was selling 24,000 units a month compared to MultiPlan's 17,000 in 1983, although Microsoft's total software revenues were higher at $68 million compared to $40 million[2]. Multiplan did however become the top-selling business package in West Germany in 1984, shifting £2.4 million worth, or about £9 million in 2020 terms[3].

Lotus 1-2-3 - MultiPlan's arch rival - ended up becoming the definitive "second-generation" spreadsheet which ruled until programs like Borland's Quattro Pro and Microsoft's update, Excel, appeared. Excel eventually destroyed all other spreadsheets in its path as part of Microsoft's desktop lock-in strategy.

Microsoft were surprisingly infrequent advertisers during this era, presumably resting on the fact that their BASIC was on pretty much every home micro ever made and MS-DOS/PC-DOS was the shoe-in standard for most IBM PCs ever shipped.