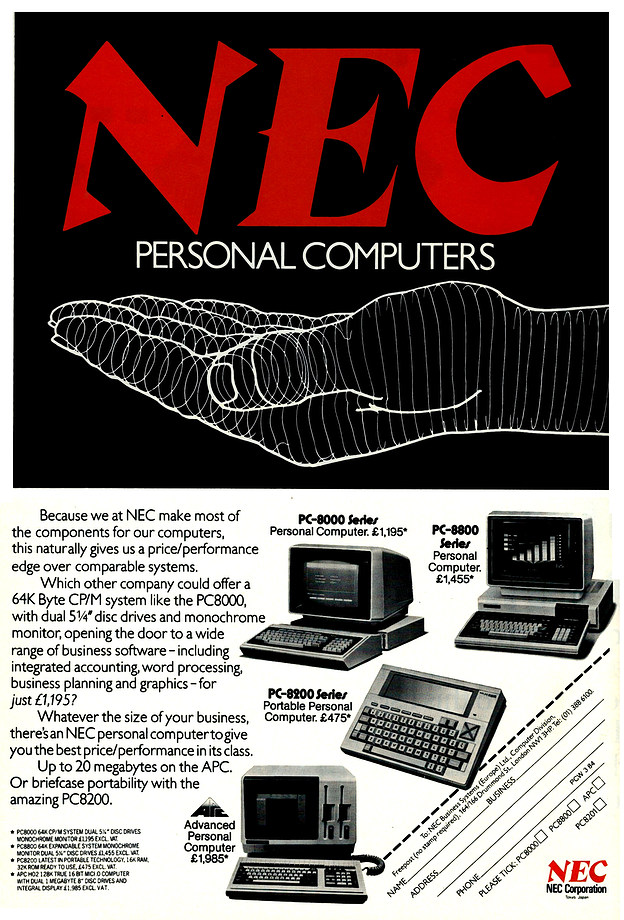 NEC were another of those companies, like Texas Instruments and Commodore, that were vertically intergrated - in this case making the computers as well as, as the advert puts it, most of the components in them including the CPU. NEC's Intel clones (presumably built under licence) found their way in to at least a few other computers at the time, including the Opus range of PCs.

NEC was founded in 1899 as the Nippon Electric Company in what was the first-ever Japanese joint venture with a foreign company - Western Electric Company of the US. In an early corporate history very similar to that of Fujitsu, the company started out in telephones and telecommunications, before branching out in to computers as early as 1954[1].

The forerunner of the PC-8000 micro featured in the advert was the PC-6000, which NEC launched as a home micro in the US market at the beginning of 1983. At the time it wasn't known whether the machine, which ran NEC's own Z80-compatible PD780C-1 processor with 16K ROM and 16K RAM, would make it to the UK, although Alan West, NEC UK's marketing manager suggested that they were "actively looking at it - there is every possibility we will launch it in Britain this year". West continued "We see the PC-6000 at the Atari rather than Spectrum end of the market - if it goes on sale in the UK it will have a price around £400"[2]. This would have put it up against the BBC Micro, which seemed to be about the only machine on the market that could get away with such a high price for a home machine.