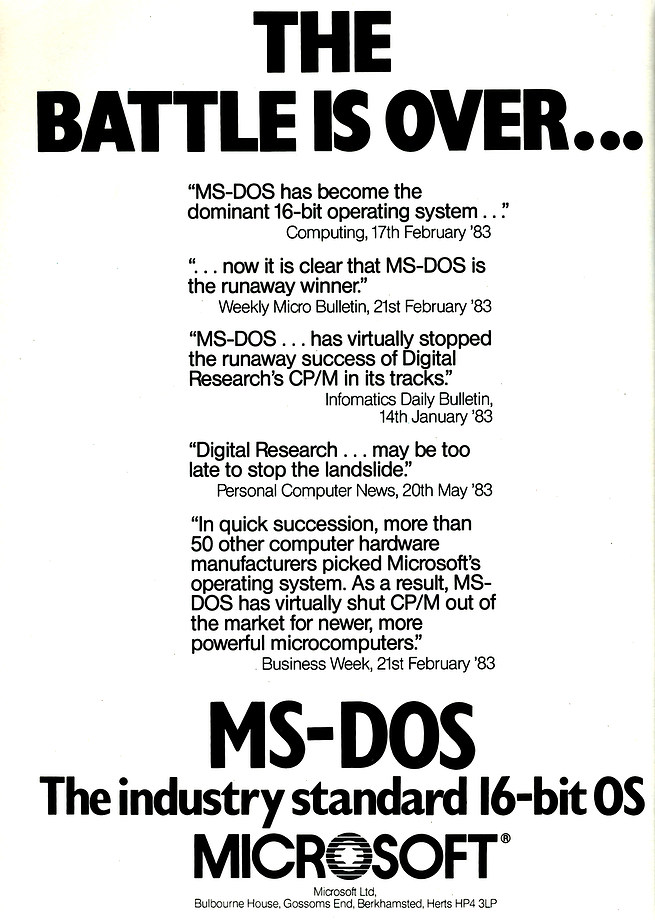 The battle is over

There's nothing like a bit of gloating, and this advert certainly has it in spades, featuring as it does a set of quotes about how Microsoft's MS-DOS had killed off CP/M to become the industry standard. It was worse because it was true, but the story of how it came about is tragic: how a quick-and-dirty clone of CP/M purchased from a garage-based company called Seattle Computer Products combined with some opportunistic sales pitching became the operating system for IBM's new machine - the 5150 - and took over the world. The author of CP/M - Gary Kildall - whose OS had up to that point been the most popular on serious business machines since the mid 1970s, lost out and his contribution to the history of microcomputers was largely ignored. The company he founded - Digital Research - struggled on for a while, servicing a large but legacy niche of older largely Z80 micros, and it even released an operating system called DR-DOS that was said to contain many features thought to be missing in MS-DOS[1]. However, the company never regained the popularity it had with CP/M and was sold in 1991 to Novell.

In early 1984, Microsoft announced that it had licenced MS-DOS to 100 companies, so on one level the advert's claim that it had "won" was somewhat premature as Digital Research at that time still had 300 companies as licensees[2]. However, in terms of scale, Microsoft had the advantage that it had the dominant IBM PC platform more-or-less sewn up - by the end of 1983 it was estimated that some 1 million IBMs or clones had already been manufactured[3]. It was the same with revenues, where it did seem that MS had beaten Digital Research with a report issued by Future Computing showing that MS was "the largest independent personal computer software publisher" in 1983, with revenues of $68 million (around £150 million in 2021). This was about the same as Apple, but behind IBM which was shifting $110 million. DR was down in seventh place with software revenues of $46 million[4].

Not everything was a success for Microsoft though. Its MSX operating system, aimed at MSX home computers and designed to provide a reliable, compatible platform for a whole range of microcomputers from different manufacturers, had not been received well, primarily as it relied on ROM cartridge software but largely because it was already out of date by the time it had been specified. DR's antidote was a disk-based version of CP/M called "Personal CP/M", launched specifically to target the home computer market. MS retaliated by announcing MSX-DOS, also disk-based, which could also run CP/M-80 software[5]. DR, meanwhile, announced a new improved version of CP/M-86 which provided some window-like behaviour and was able to run MS-DOS and PC-DOS (the IBM variant) software[6]. Tit for tat certainly, but also endlessly confusing for consumers.