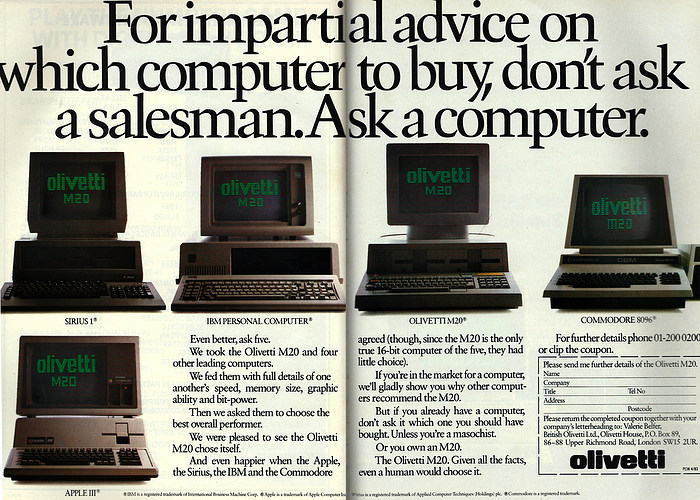 For impartial advice on which computer to buy, don't ask a salesman. Ask a computer

This is one of those implausible ads where the reader is expected to believe that Olivetti really programmed a bunch of computers in order to determine which, based on specs and performance, was the best machine available.

That flaw aside, adverts which show several of the machines of the day together are always interesting, if nothing else to highlight how diverse the market was even early in to the era of the IBM PC - these machines aren't simply variations on the IBM PC theme, they are all fundamentally different and largely incompatible systems.

The ad happens to contain the original IBM - the 5150 - which would go on to define the WinTel (Windows/Intel) version of the micro world for decades, but also has the similar-but-different Sirius 1 and two 6502-based machines - Apple's ill-fated III and Commodore's venerable 8096 PET. The Commodore in particular shows off its 1970s legacy by being the only machine to still use solely external disk drives, although it does make the PET look positively svelt and compact compared to the bulky monsters beside it.

Towards the end of 1983, the M20 received an upgrade in the form of quad-density floppy disk drives. The original machines had been offered with 160K or 320K drives, but the upgrade gave a decent 640K per drive, albeit unformatted.

This required an update to Olivetti's PCOS "Professional Computer Operating System" which became the standard for all new machines. The update supported existing software, but older machines could not be upgraded to it or take advantage of the new disk hardware. The cost of an M20-HQ with one of the 640K drives and an 11MB hard disk clocked in at £5,284 - £18,200 in 2020.