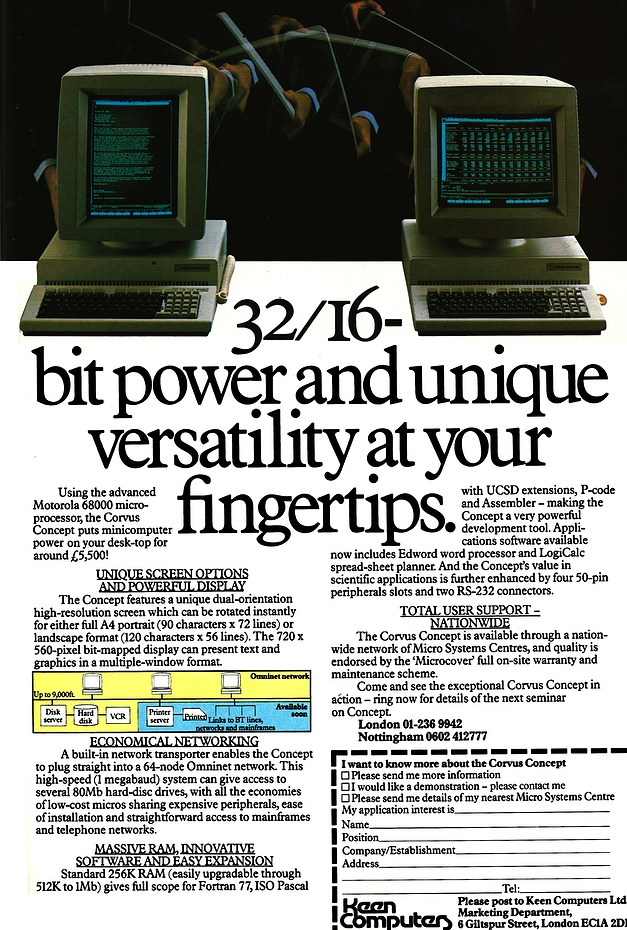 32/16-bit power and unique versatility at your fingertips

The Corvus Concept was one of several 32/16-bit machines appearing at the time, like the Fortune 32:16 or Sage II, in an era when 16-bit machines were only really getting going and 8-bit home computers were still very much the norm. The 512K model with a hard disk retailed for around £8,490 (£29,200 in 2021), ran a Motorola MC68000 processor (the same as found on the Commodore Amiga, Atari ST and Apple Mac) and was designed from scratch as a powerful, fully networked workstation.

The Concept had debuted the year before when a prototype version first appeared in the spring of 1982. It had, according to Mark Hahn, Corvus's vp of research and development, been developed as an executive workstation along the lines of a Model T Ford, i.e. as a standard, with Hahn saying that it was designed "by considering what the user looks for in a computer system, not what we thought the system should be" and that "it will be to this generation what the Apple II was to the 8-bit generation"[1].

It also came with an unusual A4 monitor configuration that could be rotated to either landscape or portrait, a feature which was normally only found on dedicated word-processor systems - this was thanks to its 16/32-bit processor and its use of large amounts of cheap memory, which meant that the Concept could use a software character generator which could produce its character set in either orientation. It was also an early example of a computer that was entirely hard-disk based - in this case offering a Winchester drive in 6, 10 or 20MB - using retro 8" floppies only as a means of transferring data or software. It was also notable for the fact that despite running a 68000, it provided four expansion slots that were fully Apple compatible, even though the Apple ran the MOS 6502. It was even possible to plug the Corvus's hard disk into an Apple, with the only limitation that any 6502-specific code wouldn't run.

The Concept was reviewed by Dick Pountain in March 1983's Personal Computer World, with a machine supplied by Corvus's UK distributor, Keen Computers. The review concluded that "As a stand-alone computer the Concept is a refined but rather expensive way to go, probably one for the MD to have as a status symbol, though a work-at-home Pascal programmer or word processor could find it a good investment if sufficient funds are available. As a hope for the future, I would like to see Corvus introduce a multi-tasking version of Merlin/CCOS [its Operating System] to take full advantage of the 68000's power and allow real multi-window working along Xerox Star lines[2].

Corvus also seemed to be somewhat famous for their early network, the Corvus Omninet. This had been used on machines like NCR's Decision Mate 5 (where it was offered re-badged as an NCR network) and even on the IBM PC, where Keen Computers was hoping to re-sell the Omninet through IBM micro dealers[3]. A new, high-performance, Omninet was said by Keen to be able to link more than 60 IBM PCs over 4,000 feet. The Omninet could shift data around at the rate of "10 A4 pages of text from one PC to another in one tenth of a second"[4], which works out at about 1mbps.

In the autumn of 1983, Corvus was claiming that the Omninet had become "the de-facto standard", with over half the installed base of networks being either Omninet or its previous version, Constellation. The list of licencees was over 20 and included DEC, Victor and Texas Instruments. In the same month it also announced its new mass-storage device, called "The Bank". This was a 100-track video-tape-based storage device, said by Personal Computer News to resemble a "giant Microdrive". However, unlike the serial Microdrive, The Bank could randomly access files on its endless-loop 100MB or 200MB tapes in no more than ten seconds, a speed comparable with floppies but on a device with significantly more storage than hard disks of the time. The Bank retailed for £1,950, or around £6,720 in 2021 money, with a 100MB tape thought to be around £25-£50 (£86 - £170)[5].