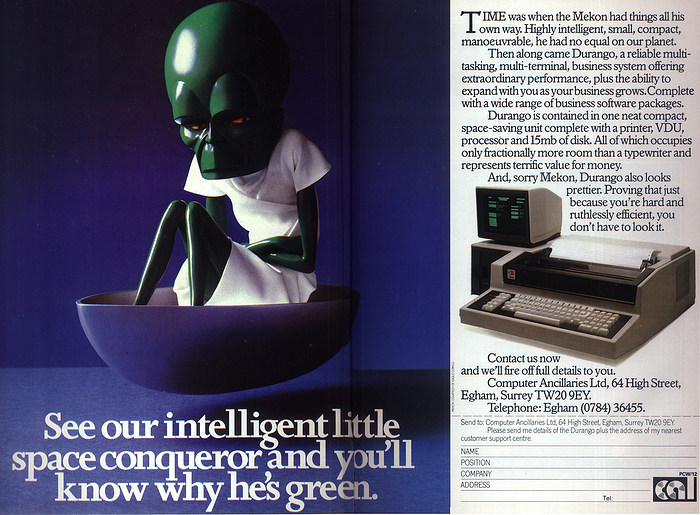 Possibly the least computer-ey micro in the entire collection, the Durango 700, distributed in the UK by Computer Ancilliaries Limited, seemed to be mostly a dot-matrix printer with a keyboard stuck to the front, a disk unit (which included a 15mb hard drive, which was reasonably big for the time) plus a small 9" monitor stuck to the side. It ran an Intel 8085 and could support four terminals connected via industry-standard RS-232 (serial) connectors. The founder of Durango, George Comstock, had left the famous daisy-wheel printer manuafacturer Diablo in 1976 and set up in a garage across the road from Apple. The company did try a successor machine, based on Intel's 80286, to try and out-compete the new IBM PC, but the strategy failed and the company went bankrupt in 1984. There's more on the machine and the company here. The advert does feature a nice green Mekon - the alien character from British 1950s comic Dan Dare. There's no price displayed, but the linked article suggests it was around $13,000 - around £37,500 in 2013 terms. This was no doubt a significant reason why it seemed to have been destroyed by the arrival of the much cheaper IBM PC, priced at around £2,900 in June of this year.