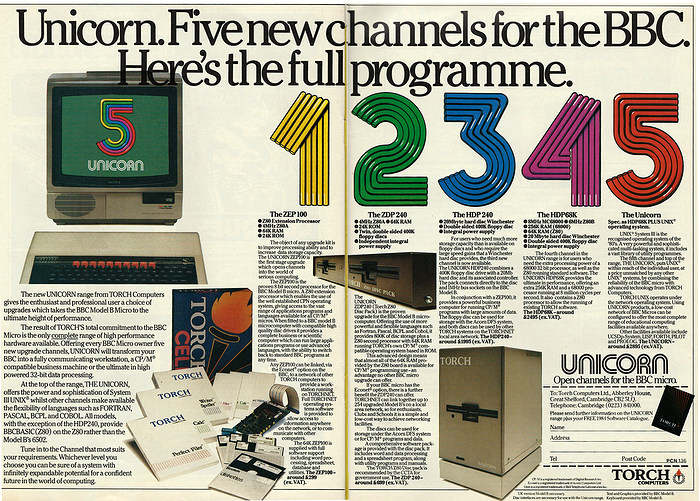 A few months before the launch of Torch's Graduate - an attempt at a complete IBM PC "plug-in module" for the BBC - comes the Unicorn. This was a range of what were effectively entire computers in a box, but which saved a little money by using the BBC to which they were attached for all the input and output, like the keyboard and driving a display. The range started with Torch's respected ZEP 100 - a Z80A processor with 64K RAM and a 24K ROM, right up to the Unicorn itself, otherwise known as the HDP68K - a machine with a Motorola MC68008, the 8-bit-bus variant of the 32-bit wonder-chip of the day and the same as used in Sinclair's QL, together with a Z80A and 256K RAM, a 20MB hard disk and a double-sided 400K floppy. Oh, and Unix - the much-talked-about multi-user system that was starting to make inroads in to the UK computer market. The Unicorn retailed for £3,330, or about £10,900 in 2020.

At around the same time, Torch also announced an update to its original Communicator-based Torch Mail software called, somewhat predictably, Torch Mail Plus. The update was available on Torch's C Series machines as well as the BBC Micro, as long as this had Torch's Z80 second processor, of which about 10,000 had been sold to BBC Micro owners. The package, actually renamed Unicomm, included viewdata and terminal software, called Uniview and Uniterm respectively, but Acorn User positive raved about the third - Unimail. Resulting from some three years of feedback from Torch and its customers, Alex van Someren wrote after reviewing it at Torch's Shelford headquarters that it was "Versatile and easy to use. Unimail is both absolutely extraordinary and particularly well thought out. This product surely deserves to be a winner and I have every confidence that it will be"[1].