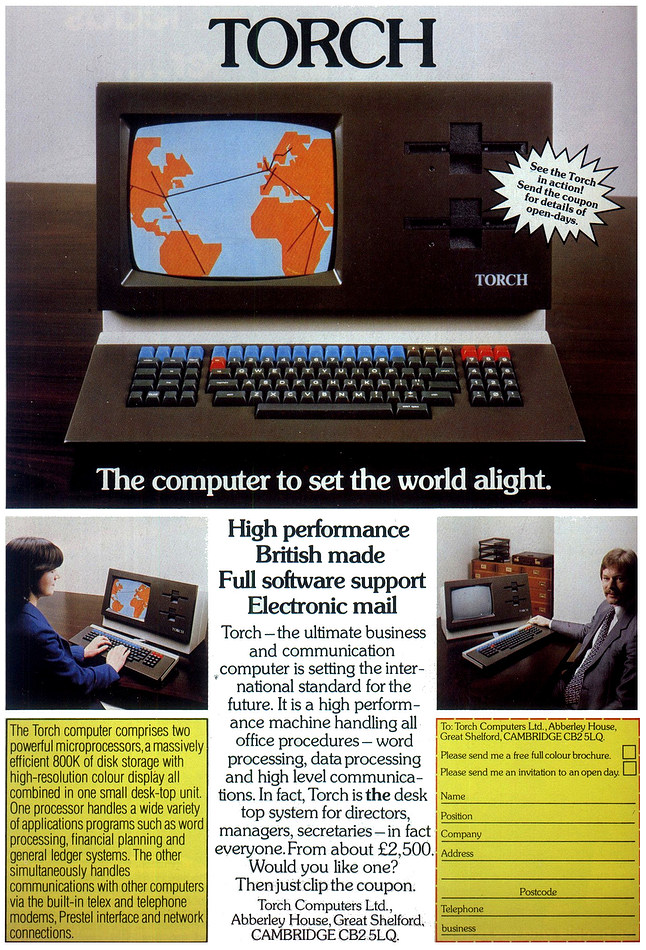 Torch - The Computer to Set the World Alight

After former chartered accountants Martin Vlieland-Boddy and Peter Harris had been applying their finance-gained skills to bring technology to the world of management consultancy, they decided to start their own company - Climar - which mainly developed applications software. As a side-line, however, they were also marketing Acorn's Atom in Canada, and it was this link that gave them a route into microcomputers and a realisation that there was a gap in the market, which they designed a new computer and formed a new company - Torch, which for a short while included Acorn's Curry and Hauser as directors - to fill. And much like Acorn, Torch also made use of Cambridge University's computer department, which was just a couple of miles away, from where it picked "the brightest prospects" and signed them up before they had even finished their finals, in order to help develop the machine. In a nod to the future, Practical Computing summed up the new machine's use for "telecommuting" as possibly "The tool for the 1980s, the first real telecomputer"[1].

This advert was for the resulting Torch (later known as the Torch Communicator), a machine based on the BBC Micro (Acorn Proton) with its own Z80 processor as well as the BBC's 6502 to drive I/O and an integral modem. It was intended as a Viewdata/Teletext terminal and included phone and telex modems as well as the then-de-rigeur Prestel adapter. It also had an Econet network connection, which was popular with the BBC micro upon which this machine was largely based and specific support for "Electronic mail". Whilst email had been around in various forms since 1971[2], August 1982 - the year of this advert - was when many modern email standards were formalised, including how email is sent with SMTP (RFC821[3]) and the format it was sent in (RFC822[4]). Even though this advert predates these standards by a few months, they would probably have been known already and if implemented like this the Torch would have likely been one of the very first computers to support "modern" email out of the box. 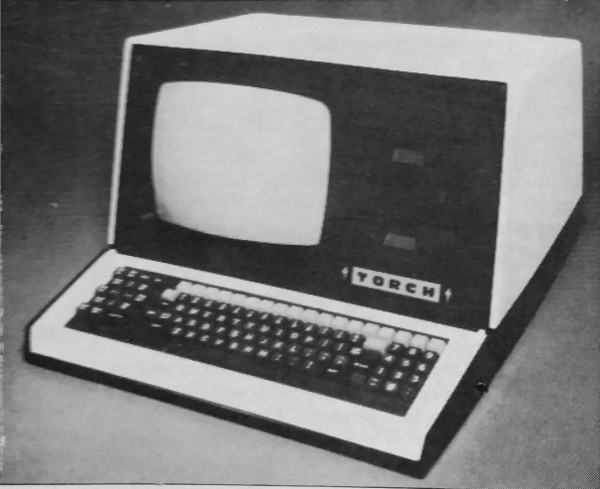 Early (possibly prototype) version of the Torch Communicator, featuring an alternate keyboard. © Practical Computing, January 1983Luckily for Torch, the Communicator became "the first micro to be fully approved by British Telecom for connection to the telephone network" sometime around December 1982, although this was several months after it was first advertised, and by the beginning of 1983 it had also been approved for direct connection to the Telex network[5] - the dedicated world-wide "text messaging system" that was already well on the way to being obsoleted by fax machines and email. It was common for Telex operators to first compile messages to paper tape, which would then be played into a Telex machine when it was connected, thus keeping transmission time, and therefore the cost, down to a minimum. The Torch could manage this directly from software, making the whole thing that much easier.

The Torch wasn't however the first Viewdata-specific machine - the Novatel from STC, the British subsidiary of ITT, had been launched around October 1979. It sold for around £750, or £4,200 in 2021, with STC forecasting that they would sell 1,000 of the machines by the end of 1979[6]. Meanwhile, the Torch was being distributed by EMG, which planned to launch 200 micro centres over the next five years[7].

Torch upped the ante when it came to multi-processor computers the following year when it launched the 700 Series, first shown publicly in early July 1983 and launched in the US on Independence Day. This contained a Motorola 68000 to run Unix, a Zilog Z80 for CP/M and a BBC Micro board with a 6502 to run I/O[8]. It ended up being several months late, and still hadn't appeared by September of 1983. The lateness was apparently because "Unix was proving difficult"[9]. At the same time as the 700 (also known as the Super Torch) was launched, Torch also announced a hard-disk version of the Communicator (which was renamed the "C" series), a local area network product called TorchNet (which was an enhanced version of Acorn's Econet) and an improved TorchMail service[10]. 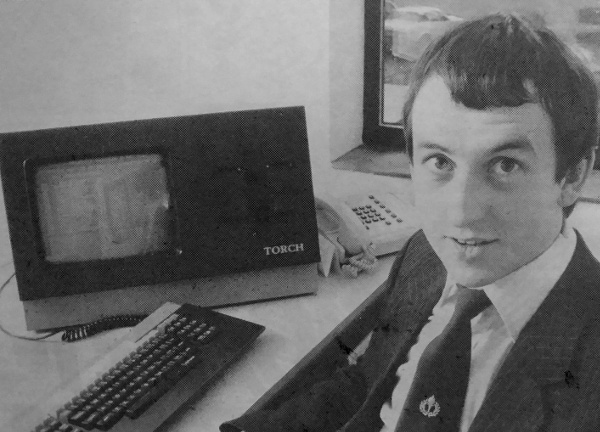 Software director Ray Anderson, developer of the Torch's "software by phone" system, © Practical Computing, February 1983Although the Communicator machine didn't in the end set the world alight, the company itself, as well as launching several other micros, went on to become quite well known for producing second-processor units for the BBC Micro, including, in 1984, an entire IBM-PC-compatibility module. This was perhaps not surprising as the company was actually a joint venture between Climar Group and Acorn Computer[11] - Torch's Development Director was Ray Anderson, who had developed operating system software for Acorn and had previously worked for arch-rivals Sinclair Research[12]. The company received some early investment in the shape of £250,000 from the Welsh Development Agency when Torch bought out Arfon, a Welsh company based in Caernarfon and founded by Kerr Borland, formerly of Nascom, and which had been making a combined case-cum-expansion-board for the Commodore VIC-20[13].

The machine retailed for "about £2,500" - around £9,350 in 2021 money. Torch went in to receivership in 1989[14], but not before the company sold its software to Steve Jobs as he was starting NeXT in 1985. Ray Anderson, who had been taught physics by none other than Stephen Hawking, went on to found successful mobile payments company Bango with Anil Malhotra[15], as well as continuing to invest in the Cambridge start-up scene[16] in companies like Texperts and Trigenix, the latter being sold to Qualcomm at the end of 2004. Texperts' CTO between 2005 and 2008, Paul Butcher[17], went on to work for SwiftKey, which ended up working with Stephen Hawking to upgrade his communications in 2014[18]. Trigenix, meanwhile, had also counted Hermann Hauser, the co-founder of Acorn Computer, as an investor[19]. Small world.