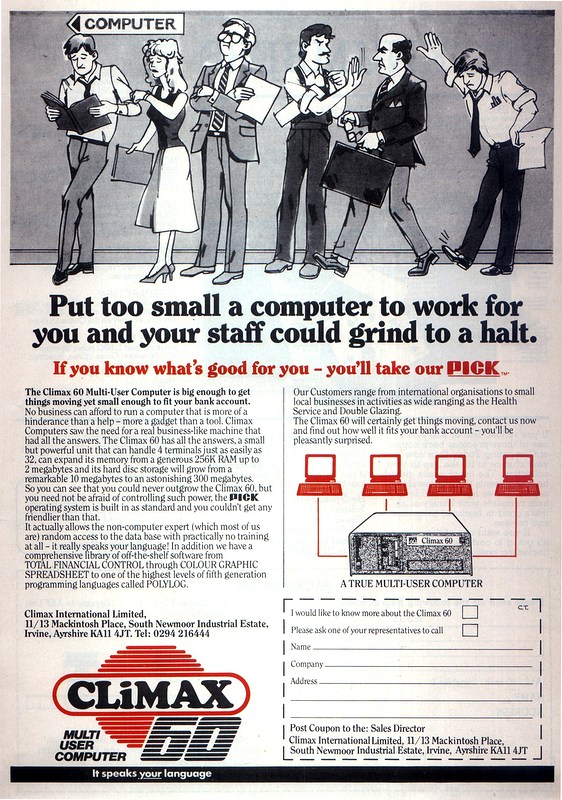 Climax 60: If you know what's good for you - you'll take our PICK

If choice of operating system is anything to go by, then this particular machine is fairly unique. It features Pick - a multi-user multivalued database system which, whilst not a pure operating system (as it needed to run on a host OS such as Unix), acted as one. Written in the early 1970s by Dick Pick as a "no-compromise system", it treated every object - data, files, etc - as simply records in a database (something that Microsoft tried and failed to do in its "Longhorn" project around the launch of Vista) and provided a generic always-on way to access them via the command line. All sorts of complex operations (like joined queries) could be done, and data could be turned in to anything else via "dictionary correlatives", "connectives" or "modifiers" using a query language called Access, or the programming language Pick Data/BASIC. It even provided weird "user exits" to help process or output data. These were direct references to assembler routines known as "modes", some of which could be quite destructive[1].

Pick was originally used by the US Department of Defense to control spare parts for the Cheyenne helicopter[2]. It began its life in 1966 at developer TRW Systems, under the name of GIMS, or Generalised Information Management System, and was first implemented on an IBM 360 mainframe, being accepted by the US Army in 1969. Richard "Dick" Pick was then allowed to continue developing the system, which first saw a commercial release in 1973 as REALITY, on a Microdata 8-bit minicomputer. As a database system it struggled to gain traction, firstly because Microdata was taken over by McDonnel-Douglas, at which point Dick Pick left to start his own Pick & Associates company and re-implemented Pick on a Honeywell Level 6. The lawsuits that resulted from this rumbled on for several years. Secondly, though, was that Dick Pick liked to keep control of any Pick development, which ended up making the cost of a legitimate Pick licence some 20 times that of a Unix licence. There were however, some Pick-a-like systems available, such as the MS-DOS-based Revelation by Cosmos Inc, or VMark's Uni-Verse, available for Unix[3].

The Climax machine itself was one of several like 1983's RAIR that looked like regular microcomputer boxes but which supported several terminals - in this case up to 32. It provided up to 2MB of RAM and up to 300MB of disk storage. There's not however much else to be said about it, and there's nothing in Google - the machine and the company seem to have disappeared without trace. Climax did however contact Guy Kewney of Personal Computer World at the end of 1984. They were looking for agents to distribute the Climax, but appeared to use a fairly vague scattergun approach to recruitment. The letter, written by Bruce Skelton of Climax, read "Perhaps if I begin by telling you that our multi-user incorporates the Pick Operating System" and that "the reaction of the press to Pick has been almost as dramatic as the system itself", but failed in its mission by addressing it to a computer magazine journalist with the line "a study of the market has identified your organisation as one company likely to be interested in an agency agreement on our multi-user computer". The cost of a franchise? £12,000, or £39,500 in 2021 money[4].

As well as the Climax, there were a few other Pick-based micros around. In the February of the previous year - 1983 - Pick appeared on the Altos range of micros, as well as the aforementioned Honeywell-based Ultimate. Software written for the Ultimate could also be downloaded and run on Universal Computers' Epick. This Z80-based computer was launched as a "cheap" Pick computer, starting from £7,500 - about £25,800 in 2021[5]. Nick Drescher of Universal commented that "the entry level to the Pick system and all its benefits is dramatically reduced".