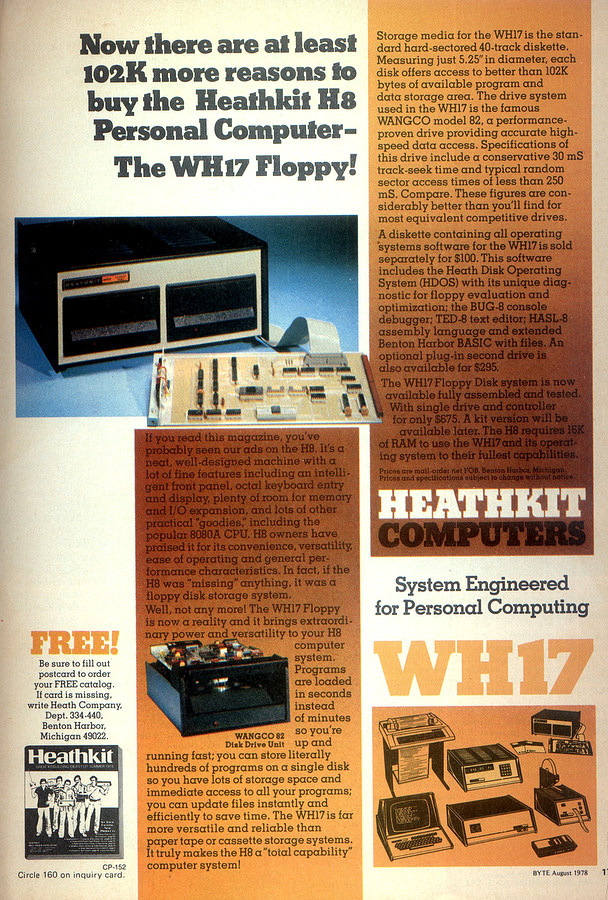 Now there are at least 102K more reasons to buy the Heathkit H8 - the WH17 Floppy!

A straightforward ad from popular electronics-kit manufacturers Heath, trading as Heathkit Computers of Benton Harbor Michigan. Heathkit's H8, an Intel 8080A-based machine running on Heathkit's own proprietary and not-compatible-with-anything-else 50-pin "Benton Harbor" bus, resembled some sort of industrial or laboratory equipment, rather than a conventional computer. It was available in kit form, as were others of this era (like the Nascom 1 for instance), even though this was a year after the first complete "modern" all-in-one personal computers (or at least mostly-in-one with the exception of a monitor or some sort of storage) - the Commodore PET, Tandy TRS-80 and Apple II - had been released. Perhaps for this reason the choice of interface of a hexadecimal numpad and an LED readout was a little surprising. To counter this primitive interface, several Heath peripherals, including a terminal and a paper-tape reader, could be attached, as well as the subject of this advert - the WH17 Floppy Disk system (the "W" indicated that this was available ready-assembled - a kit version was to be released later). It was based on the apparently-popular Wangco Model 82 5.25" drive, and provided the somewhat non-standard capacity of 102K per disk. It retailed for $675, or about £2,730 in 2020 money.

The magazine the advert came in also contained an postcard-style reply flyer (bottom) which could be posted off to order the Heathkit catalogue. Amusingly, it exhorted the reader to "Share the Heathkit experience with your kids" and referred to "nearly 400 fun-filled kit-building experiences both you and your family can enjoy", including making [radio] Ham gear, stereo components and, er, colour TVs. Clearly not enough people are sitting down with their nine-year-old to build a colour telly from scratch any more.