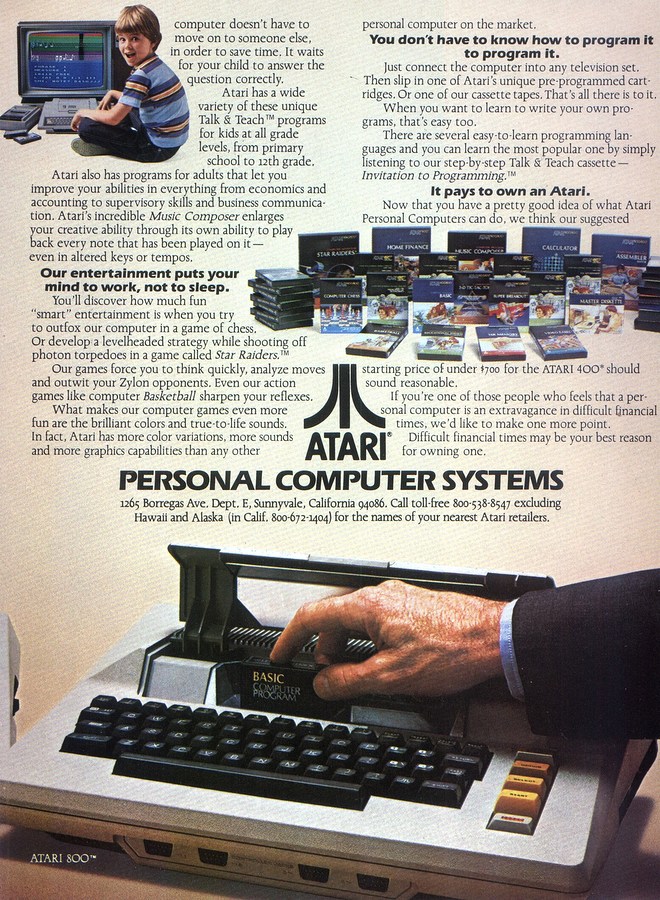 Released in 1979, the Atari 800 was originally designed as the better of two models, the other being the Atari 400. The 400 and 800 originally denoted the expected amount of memory that would ship with each - 4K and 8K respectively - but by the time they were launched, memory prices had fallen enough so that both shipped with 8K[1]. It was one of a raft of computers based upon the 1975-designed MOS 6502, which ranged from the 1977 Commodore PET up to the Acorn BBC Model B.

The 400 was considered overpriced at $600, coming as it did with a membrane keyboard like Sinclair's ZX80 and ZX81 models. However, the higher-priced $1000+ 800 (about £3,750 in 2020) was a much better bet, with its well-specified modular and uniform bus interconnect, which simplified writing software targetting peripherals like disk drives and printers. However, Atari made technical information about this secret and would only release details if programmers signed up to write Atari-brand software only, thus alienating a vast army of hobbyist software developers who just moved on to write for other machine instead[2]. Another issue in holding back sales was the fact that Atari was well-known games company, with the public - according to Michael Tomczyk in his book "The Home Computer Wars" - thinking that the Atari machines might just be expensive versions of the 2600 Video Computer System. It might not have helped that the 800 even had the same sort of cartridge slot at the top.