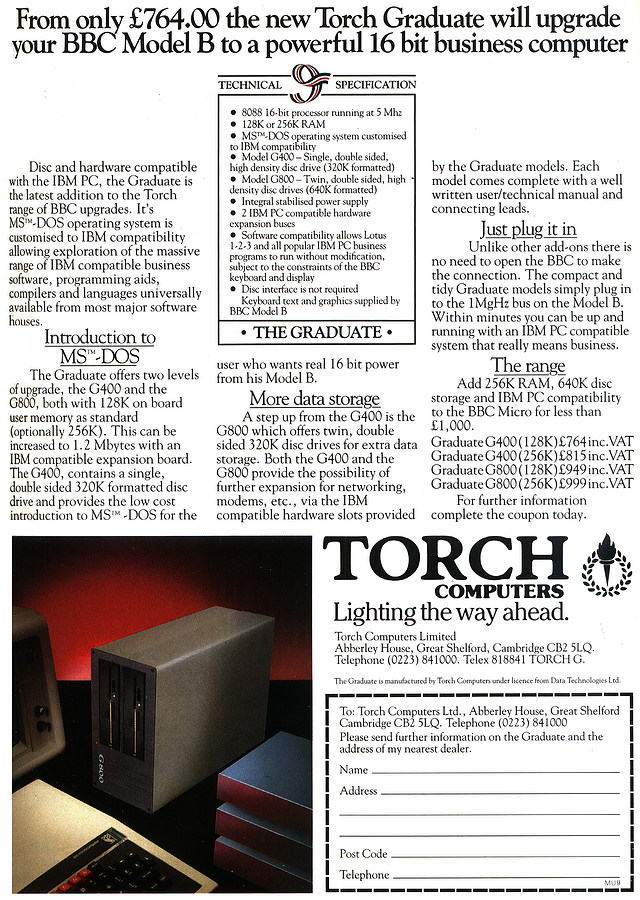 Something of a curiosity from the days when it was quite common to hybridise computers, like the Commodore C128 with its own native mode, a 6510/6502 equivalent for C64 compatibility and a Z80 for all that CP/M stuff, is this "add-on-on-steroids" for the BBC B, enabling it to effectively become an IBM PC, albeit in a set-up in which the BBC would be relegated to providing a keyboard and video out. Billed as "the ultimate upgrade" for the BBC Micro, it had been licenced from Data Technologies[1], a company which had been set up by Torch's former chairman Martin Vlieland-Boddy[2]. It was certainly cheaper than the real thing at only £764 (or about £2,510 in 2021 money) for the basic version - compared to around £2,600 for a real IBM, although the speed of screen handling was said to have been so slow as to handicap the entire system - all input except for disk access went over the BBC's 1MHz bus and not the much faster Tube. Personal Computer News considered that one of Torch's other offerings - the ZEP Disk Pack, which added a Z80 and thus gave the BBC CP/M capability, was a better bet for BBC owners who wanted to get in to some more serious business software. Torch's Research and Development director, Ray Anderson, also referred to the ZEP board when he said that Data Technologies had been approached to design an 8088 board to fit inside the BBC in the same way. Before this, Torch had been importing an 8088 processor board from the US which it was selling, along with 256K RAM, as an external MS-DOS "workstation" called the Torch 388. This particular module retailed for £1,995, or about £6,570 in 2021. The two products weren't in conflict as the Torch 388 made no claims to be "IBM Compatible", only that it would run the MS-DOS operating system. This was just as well as because it used the BBC Micro's disk controller, it couldn't even read IBM disks.

The company was bullish about its new peripheral and in a move which Torch's sales director Peter Harris dubbed "a major drive by Torch Computers in the High Street", it signed a distribution deal with High Street retailer of the day Lasky's, which would have made it a lot easier for buyers to get hold of a Graduate. Lasky's computer buyer Phillip Halton reciprocated with "we see the Torch Graduate as the ultimate upgrade system for the BBC Micro"[3].

Torch was set up as a joint venture between Climar Group and Acorn Computer, which had a 33% stake, with former Sinclair employee and Acorn operating system developer Ray Anderson as co-founder and Acorn's Chris Curry and Hermann Hauser on the board. Curry and Hauser left the company early as "it was felt the two firms were producing rival products". In July 1983, Torch was nearly bought out by mega-conglomerate GEC, which at the time had a £1.3 billion cash pile and was on something of an acquisition spree (it took over Dragon Data in the same year). Martin Vlieland-Boddy, Torch's chairman at the time, said of the possible deal that "GEC [was] giving 100 per cent backing to Torch". Optimistically, he continued "the end user normally goes for a stable company and the credibility of having a major company like GEC behind us will allow us to take on IBM and Sirius"[4]. The deal, which would have meant GEC taking a majority stake in the company, fell through[5] but a million pounds had been raised by "existing shareholders" which allowed the company to keep going. These shareholders didn't include Vlieland-Boddy, who resigned as chairman "to devote time to his other business interests". He was replaced by Robert Gilkes, formerly MD of UCSL Microsystems and Guy Neely, previous financial director of Glaxo Holdings, as joint managing directors[6].

Acorn then caused some surprise by buying out Torch in May 1984, especially considering that Torch's Z80 add-ons were in direct competition with Acorn's yet-to-be-revealed Acorn Business Machine and its own Z80 second-processor unit[7]. Torch, however, seemed OK with the deal - Torch's Bob Gilkes saying "the two companies have an exceptionally high degree of compatibility". The prime motivation for the buy-out was because Acorn was struggling to develop a viable machine beyond the BBC Micro/Electron. Non-exec director Dr. Alex Reid said that "we hope this will advance Acorn's plans to build a business computer". Acorn clearly had plans to diversify its business - it bought a 25% stake in communications company Torus Systems, founded by Steve Ives and Steve Jolley, in the same week as the Torch deal[8].

Torch's first product - the Torch Communicator - was more-or-less a BBC Micro with a Z80 board and acted as a Viewdata/Prestel and email terminal[9]. The company went bust in 1989.