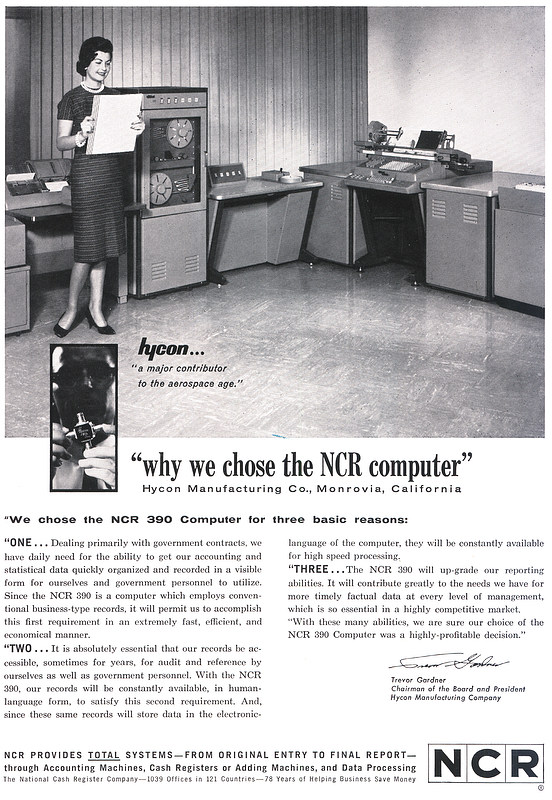 Why we chose the 'NCR' computer

From the days when computers took up whole rooms and secretaries stood around in front of monster tape drives smiling at cardboard, comes the NCR 390 - introduced in 1962 as a cut-down version of the company's 315 system, and which was known as "the first of NCR’s programmable Visible Record Computers". VRCs were relatively cheap, as they were built just to fulfil the accounting functions they were designed for, however they sometimes led their builders to believe that they could be programmed to do much more. Programming a VRC machine beyond its original scope ended up being "a disaster" for companies like Phillips, Olivetti, Kienzle and Triumph Adler, where customers would end up paying £20,000 for additional programming, despite having been sold the idea by salesmen promising a cost "from £3,000"[1].

The unique selling proposition of NCR's particular range was that the output continued to look just like the cards ("visible records") from NCR's older accounting machines. This output was recorded upon individual ledger cards which showed a printed record of every transaction on the face, but the reverse held two (or possibly three) magnetic stripes on which the balances were recorded electronically. The input to the computer was all on punched paper tape, and the ledger cards stored all the basic data in the stripes, with the front being readable by the accountants just as they had done it since before the war[2].

Former NCR 500 Visible Record Computer programmer David Addy continues "This all seemed like a good idea, but had drawbacks. One or two accountants could not get over the idea that if they wanted to change a figure, they just crossed out the wrong number and wrote a new figure on the front of the card, instead of filling in a proper controlled input form which would be punched on to the paper tape. The mag stripes also did not much like the manual handling involved and so creating replacements for "dead" cards was frequent. Of course this interrupted the history of previous transactions printed on the front. It was also slow because every card had to be fed manually into the machine to read it and then fed again to write the new data on the stripes. Also the front of the card had to be updated by a laborious tabbing across to type or print a new line in each column. All these routines were crammed into a memory size of 400 words of 8 characters each, and programmed in machine code".