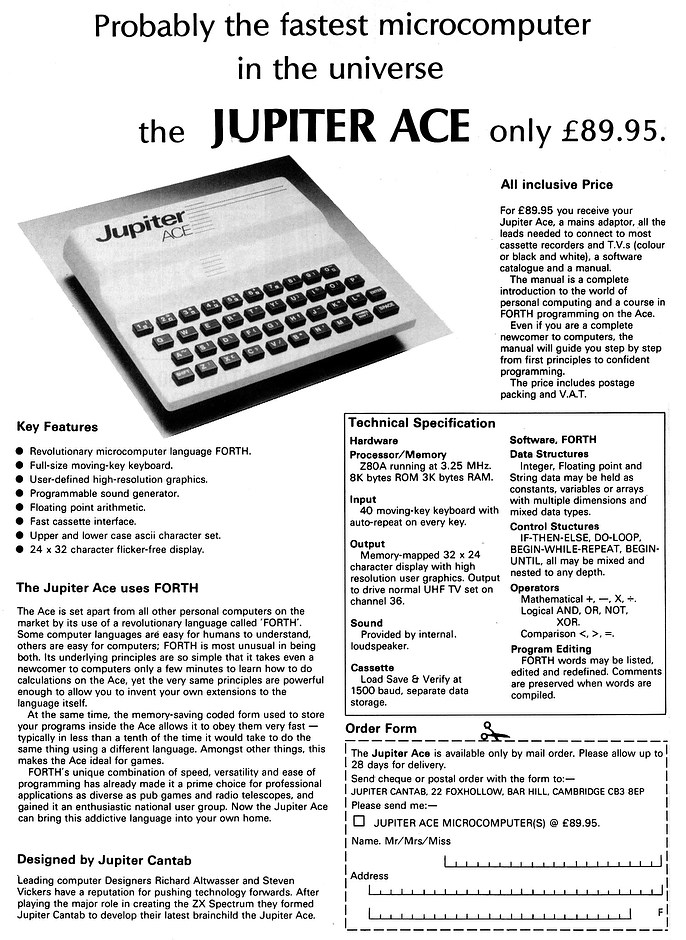 Probably the fastest computer in the univers - the Jupiter Ace"

Perhaps this early advert for the Jupiter Ace - an 8-bit Z80-based micro designed by ex-Sinclair engineers Richard Altwasser and Steven Vickers, both of whom had worked on the ZX Spectrum - is edging ever so slightly towards hyperbole in claiming to be the fastest in the known universe, but it was certainly considered speedy at the time, with reviews like that in November 1982's Your Computer calling it the "speed machine"[1]. Despite Altwasser having stated the importance of colour when designing the Sinclair Spectrum[2], the Ace was monochrome, although there was provision for colour as an expansion. By the early spring of 1983, Vickers suggested that Jupiter was "Looking at the possibility of a colour card for the Ace"[3]. 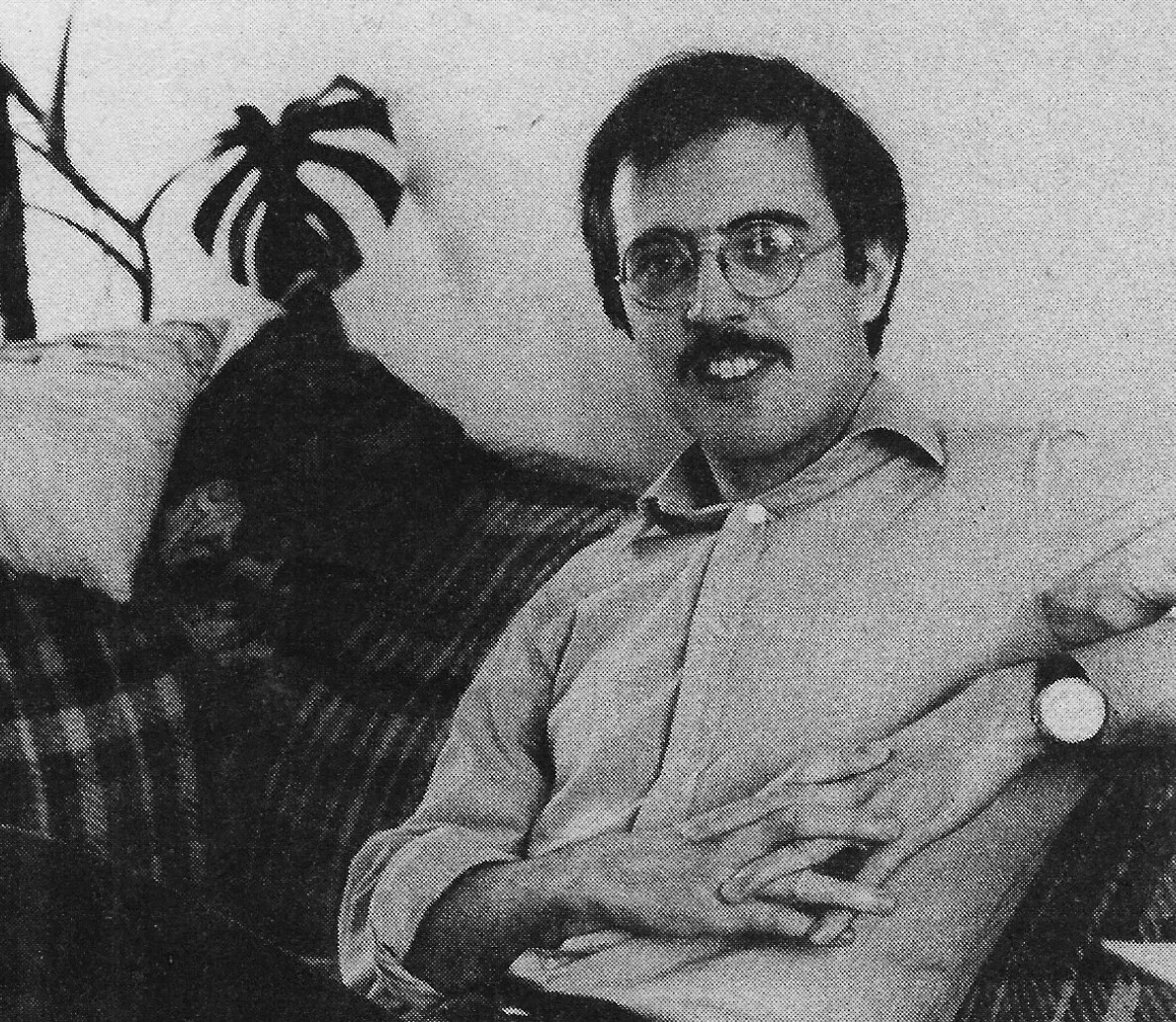 Steve Vickers of Jupiter Cantab, © Popular Computing Weekly August 1982Vickers, who hadn't even touched a computer until he was sixteen, left Leeds University with a PhD in Mathematics. After being turned down for a job at Sinclair, he landed a gig with software house Nine Tiles which, as it happened, had the contract with Sinclair to write all of its software and firmware. When Nine Tiles started work on the Spectrum, Vickers landed the task of writing software for the new machine, which he did for the next six months, spending half his time at Sinclair's Kings Parade offices in Cambridge as it "was the only place I could test what I was doing". It was whilst spending time there that he worked with Altwasser, who was working on the Spectrum's hardware. Altwasser had a degree from Trinity College, Cambridge and had joined Sinclair Research in September 1980, after working in Worcesester but finding the micro-based automation company he was at "too limiting".

Both Vickers and Altwasser enjoyed their time at Sinclair, although they were quick to point out that it meant being able to cope with the pressure without having a heart attack, in an environment where - despite the frequent delays in shipping products - a deadline was a very real deadline. An example was given of the development of the Spectrum, where a rough specification was set out in September 1981 with the final product launching at the Earls Court Computer Show in April 1982, by which time the thing had to be ready to go into production - all the while working in great secrecy, minimising how much was leaked to the press. Despite the precautions, Altwasser had been surprised about how much was actually known about the Speccy prior to its launch. There was also no shortage of money for R&D - a request for equipment was apparently never refused - and thanks to Sinclair's size it was possible to get quick decisions on new ideas[4].

Vickers and Altwasser outside Trinity College's main gate in Cambridge, © Sinclair User 1983In April 1982, Vickers left Nine Tiles - at the same time as Altwasser left Sinclair - in order to set up Jupiter Cantab. Vickers said of the move "I left Nine Tiles because I wanted to be my own boss. I saw how many millions Clive Sinclair was making and thought 'why not us?'"[5]. Also, despite the freedom the pair had at Sinclair, the company was run by one man and, according to Altwasser, "if a decision needed to be made, there was only one man who took that decision".

The new company's second product - the Jupiter Ace (the first was a book of Spectrum programs) - ran the functional-programming-style language Forth, at a time when pretty much everything else ran Microsoft's BASIC, or occasionally some other custom variant of, er, BASIC. Forth had been invented in the early 1970s at the National Radio Astronomy Observatory in the US by Charles Moore and Elizabeth Rather and had apparently first come to fame as the language used to control the cameras in certain scenes in the original Star Wars, but whilst it was given to be significantly faster the BASIC (it could work at around 80% of machine-code speed), its Reverse Polish Notation style of programming meant that it was easy to pick up only if you were used to HP's ludicrously-expensive scientific calculators and not most other micros ever made. The Ace was certainly much faster than the Spectrum, which was even slower than the 3.5K VIC-20 - even though its processor was nominally 4 times faster than the latter's 1MHz 6502. Vickers explained "Much of the ZX81's firmware was taken over to the Spectrum unmodified. We had to get the machine out quickly so the ZX81 code was altered as little as possible. That is why the Spectrum is comparatively slow - the ZX81 was always designed to save bytes, not time".

One of Forth's biggest features was that it allowed programmers to create new syntax (words in the language) by building upon existing ones. However, given most programmers' lack of commenting, this could make Forth written by someone else virtually unreadable, making it - as Gary Kildall of CP/M fame once said - a "write-only language"[6]. It was this - combined with its black-and-whiteness - would appear to have contributed to the low sales of the machine, which was discontinued in 1984 after having sold only between 5,000 and 9,000 units, despite the low price of only £90 (about £330 in 2020 money). By way of comparison, Amstrad was shipping some 10,000 units of its P‌CW word-processor per month in early 1986[7] whilst in Japan, Nintendo had been shifting 10,000 of its Famicom game-focused computers per day during 1985[8].

At least Jupiter Cantab helped stretch the budget out by producing mostly adverts like this one - very plain and resolutely monochrome, just like its micro. David Kelly summed it up in an editorial for Popular Computing Weekly in September 1982, saying "Whatever your views on Forth, Altwasser and Vickers should be congratulated for trying something new. I just wish the Jupiter Ace was colour instead of black and white"[9]. This was perhaps especially perplexing as when Vickers and Altwasser formed their new company, it was originally called Rainbow Computing, in a nod to their former involvement with the Spectrum - Rainbow having been one of the names suggested for the ZX82[10].

Also of interest is the keyboard layout: the Ace was one of a handful of machines of the era that eschewed a conventional spacebar. Not least amongst the others that did this was the Spectrum (no surprise there, really), but there were others too, like the Sord/CGL M5.