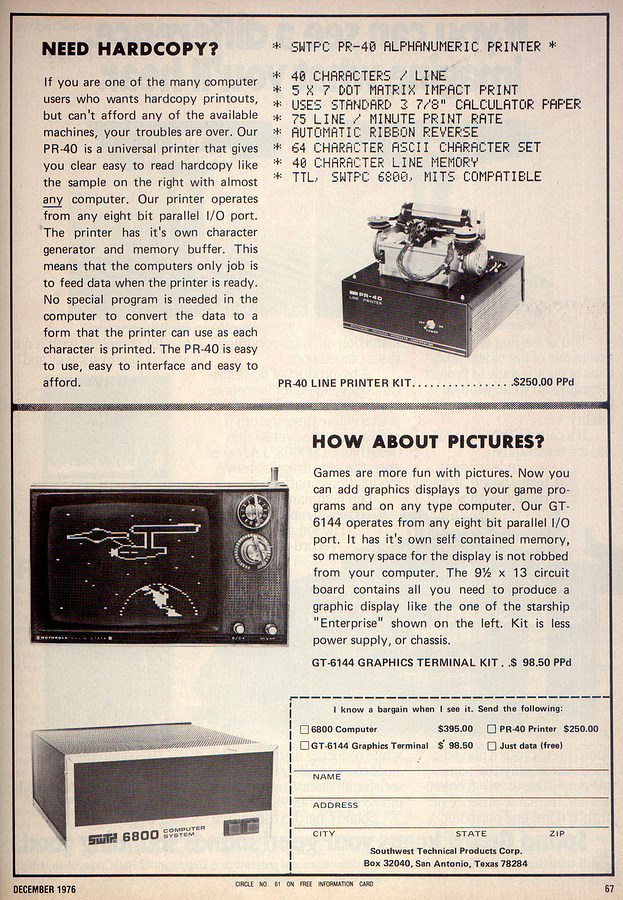 SWTPC: Need hardcopy? How about pictures?

An early advert for two products from SWTPC, the San Antonio, Texas company that had been founded in 1967 out of an earlier business that specialised in selling electronics kits[1]. The first of the two is for a completely bizarre-looking dot matrix printer, the SWTPC "PR-40 Alphanumeric Printer". Dot matrix printers had only been around for a few years, with the first commercially successful one probably being DEC's 1974 LA36[2]. SWTPC's version looks far more like an early cyclinder phonograph than a recognisable printer - it was based upon receipt-printer technology, and it looks it, and even used till-roll-sized 3 and 7/8" paper, but it at least had the advantage that as it ran from a generic 8-bit parallel port it was fairly universal, with the advert claiming TTL, MITS/Altair and SWTPC's own 6800 compatibility. It retailed for $250, or about £1,630 in 2020. The second pictured component is the GT-6144 graphics terminal for $98.50, or about £570 in 2020.