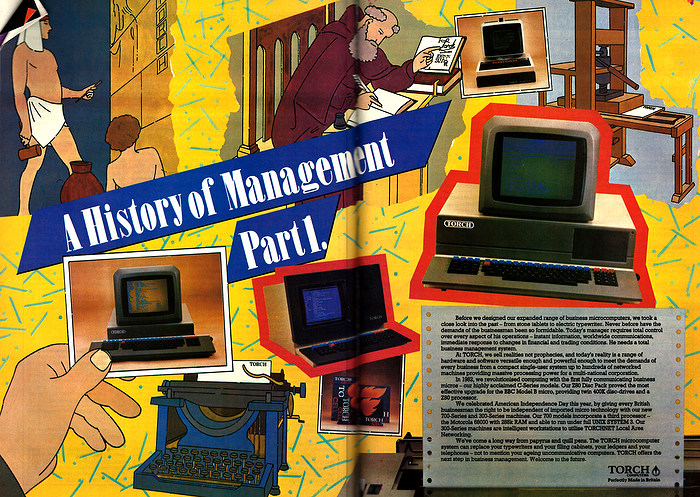 A history of management: part 1

This colourful and quintessentially 80s advert from Torch provides a nice summary of the company's output so far, including the original Communicator (center, now known as the C-series) as well as the Z80 Disc Pack (top, under a BBC Micro) and the company's new 300 and 700 models (left and right). The latter machine contained a third processor, in addition to a 6502 and a Z80, in the shape of a Motorola 68000 and ran Unix System 3. It, and the Series 300 "intelligent workstation" were launched in the US on Independence Day, with the advert claiming that this gave "every British businessman the right to be independent of imported micro technology". It was also rumoured that Torch had paid William Woollard of the BBC's Tomorrow's World programme some £4,000 to speak at the UK launch of these 68000-based "Super Torches"[1].

The following year, Torch released the Graduate - a mostly-IBM-compatible complete add-on unit for the BBC Micro, which although a good idea in principal was hobbled by the fact that it was connected to the micro over its 1MHz bus, reducing the speed.

Torch had started as a joint venture with Acorn - the two companies had shared offices for a while and Torch was even set to become the business arm of Acorn, before a disagreement on policy led to a severing of links, except for the fact that Acorn remained contracted to supply Torch with BBC boards for its computers[2]. It had flirted with cash-rich GEC, which had come close to taking a majority stake in the company before the deal fell through[3] but then in the June of 1984 the company was unexpectedly bought back outright by Acorn[4]. It also appeared to have grown weary of the obvious torch metaphors, and had changed from "Lighting the way ahead" to "Perfectly made in Britain" as a tag line.

Although it had been bought back by Acorn, the two companies continued with what were essentially conflicting products. Torch had already sold 6,000 of its Z80 disk pack/second processor units before Acorn launched its own Z80 unit; the two companies produced version of Acorn's Econet and both companies had higher-end business machines - Acorn with its ABC and Torch with its Unicorn 68000 unit. The 68008 in Torch's unit - the same chip as used in Sinclair's QL and essentially a version of the "superchip" 68000 but with a restricted 8-bit data bus - was up against Acorn's not-yet-ready National Semiconductor 16023, later renamed the 32016. Both companies, unsurprisingly, had a different spin on the issue, with Torch's chairman Bob Gilkes stating "The two companies have an exceptionally high degree of compatibility in products, in strategic thinking and in management style. We believe this new grouping will become a major British entry in to the world market for communicating business systems", whereas Acorn's Alex Reid had more of the axe-man's view, saying "Torch's established position in business systems is a natural outlet for some of Acorn's own business systems products, and a rationalisation of the two companies' development efforts will give a substantial boost to both Acorn's and Torch's market prospects". National Semiconductor, or NatSemi as it was frequently referred to, had had the dubious honour of reporting the semiconductor industry's largest loss (up to that point) the year before, when it blamed a general decline in the US chip market for its defecit of $17 million[5].