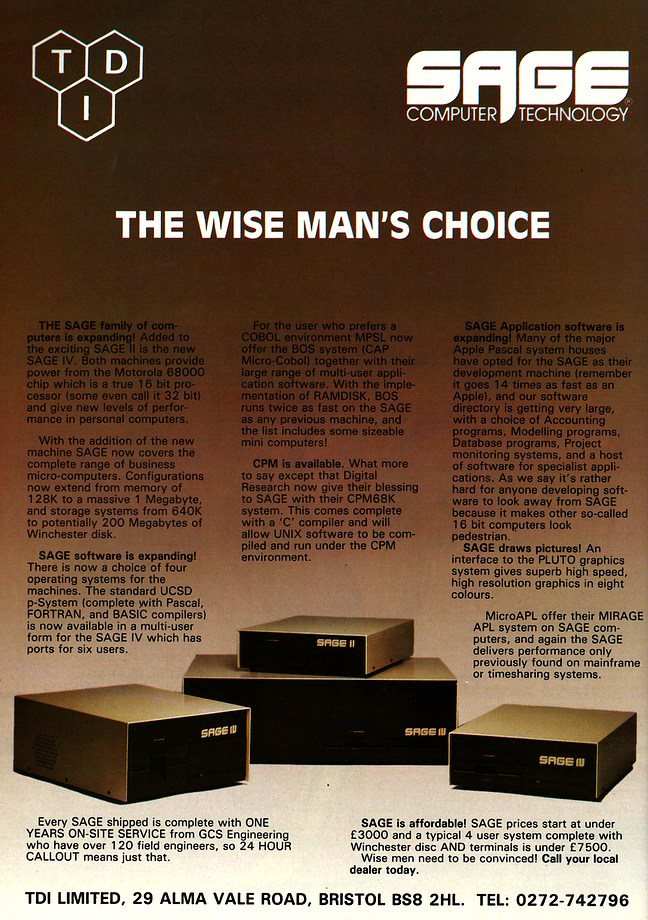 The Sage family of micros - looking as they do like 5.25" floppy disk units - seemed to have quickly built up a reputation as speed machines. They used Motorola's 68000 a 32/16-bit CPU which was about the best available at the time, but ran Pascal on the unusual UCSD p-system. It ran at 8MHz and could compile Pascal programs at the rate of 1800 lines per second. It was also possible to configure an internal chunk of memory as a RAM disk, and even boot the machine in to this. This helped make the machine seem very fast, with "response times for everything, except jobs like disk formatting, [being] measured in fractions of a second"[1].

Designed by company boss Rod Coleman, who had built his first Arithmetic and Logic Unit (ALU) whilst in his early teens, the Sage II was developed from scratch as a single-user 68000 machine, at a time when this particular chip was used more commonly to drive multi-user Unix systems. Coleman also said that it was "somewhat of a mixture of Apple Computer technology and Altos packaging". The entry-level system with 128K memory and a single 320K 40-track floppy, plus p-system version 4.1, Pascal, Basic and Fortran compilers, a 68000 Macro assembler and on-site service for a year, retailed for £2,870, or about £9,890 in 2020.

Shortly after the launch of the Sage II, a multi-user version - the Sage IV - with 512K memory, 6 serial ports (for terminals) and a hard-disk controller capable of supporting 5 Winchester drives was announced at Comdex in Las Vegas. When asked what happened to the Sage III, Coleman referred to the ill-fated Apple III. "We felt a bit superstitious about that, after the Apple III. There will never be a Sage III"[2].

In the summer of 1985, Personal Computer World published its updated benchmarks. This revealed that despite being nearly two and a half years old, the p-Code-running Sage II was still the fastest machine available, topping the charts at a benchmark average of 4.47 seconds. This was nearly twice as fast as the end-of-1984 IBM PC AT and Olivetti's M24 and 17 times faster than TI's failed TI-99/4A. The next seventeen micros in the chart were all newer machines than the Sage. Elsewhere, the BBC Micro was still holding on well at spot 19, above machines like the Sirius 1 and IBM's original PC[3].