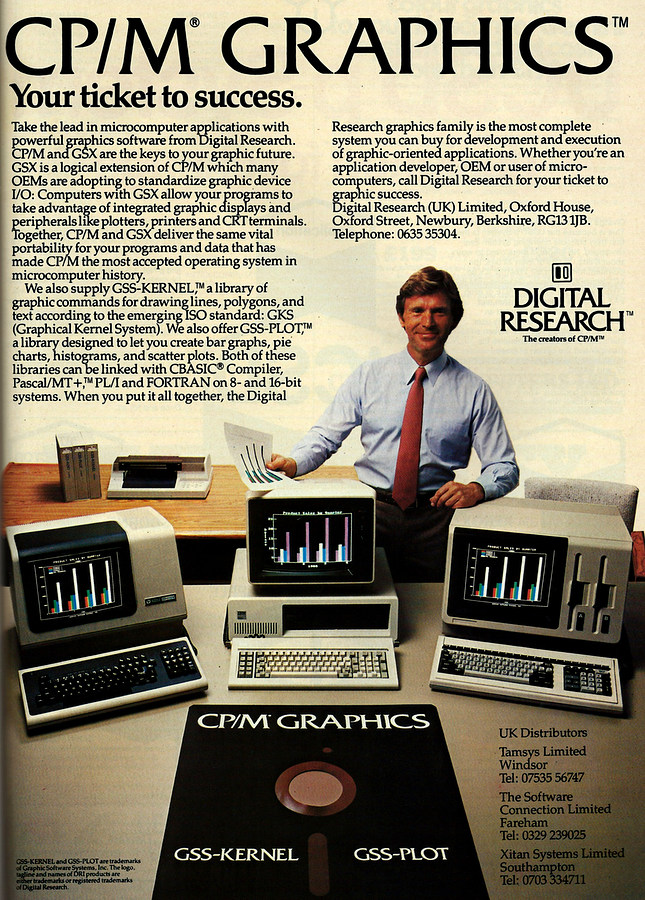 CP/M Graphics - your ticket to success

Founded, along with his wife Dorothy, in 1976 as Intergalactic Digital Research, three years after Gary Kildall first wrote CP/M - the first-ever disk operating system for a microcomputer, Digital Research, or DR, became by far the most popular operating system for "serious" and business micros during the late 1970s and early 1980s, until Microsoft sold a heavily-plagiarised version of it to IBM, which they called PC-DOS and which had been bought from Seattle Computer Products - one of many companies at the time making cloned versions of CP/M[1]. PC-DOS became MS-DOS, and Microsoft's tactics meant that CP/M was shut out[2].

DR went on to produce 16-bit and concurrent (multi-tasking) versions of CP/M as well as DR-DOS - an operating system for IBM PCs that contained many features thought to be missing in MS-DOS. It also released the subject of this advert - the GSX graphics extension for CP/M. This was used on Amstrad's CPC 6128, and evolved in to the GEM "WIMP" package which was used to great effect on the Atari ST.

At the end of 1985, Kildall started a new company, whilst remaining on the board of DR. It was called Activenture and was based at Monterey in California and produced CD-ROMs. Its first product however wasn't a CD-ROM but was a Laser Disc version of Grolier's American Encyclopaedia. Although there was only around 120,000 interactive Laser Disc players in the US, Kildall was nevertheless optimistic about his new company's outlook, despite describing it as a "high risk venture". He continued "The profit margins are very good, and the number we can sell is good". The market for on-line resources was also growing, with a report published by Cuadra Associates revealing that by October 1985 there were 2,890 on-line databases world wide, which Carlos Cuadra, president of the company, described as a "band wagon". The CD-ROM market was also growing, with other research from Frost & Sullivan conservatively forecasting a growth of 271% to the end of 1990[3].

Digital Research was largely sidelined after Microsoft's deal with the steamroller that was IBM and never regained the position of ubiquity and popularity it had with CP/M. The company was sold to Novell in 1991, albeit for $120 million. Kildall died three years later at the age of 52, with his significant contribution to the microcomputer industry largely ignored.