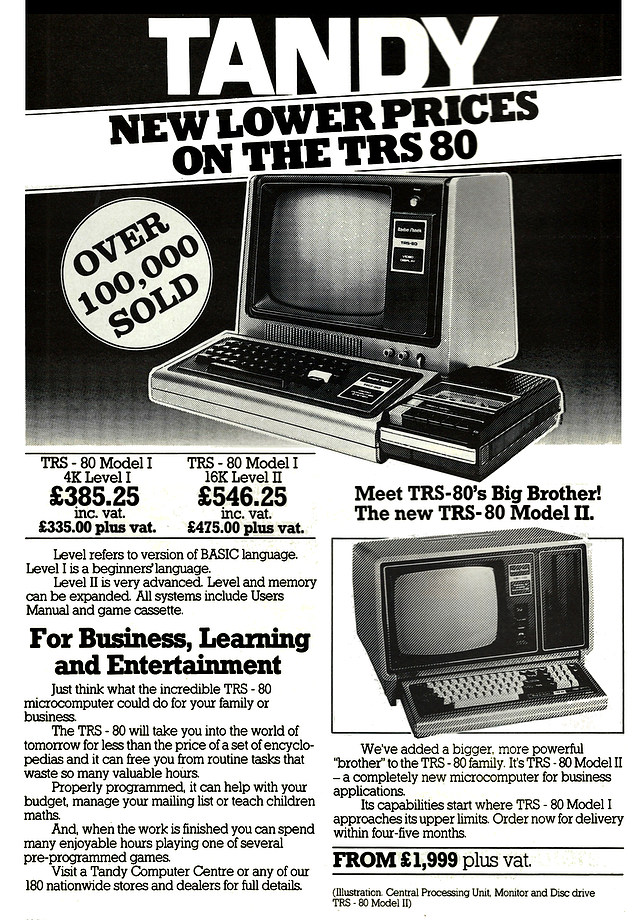 Tandy had announced its follow-up to the 1977 TRS-80 Model 1 at the end of 1979 and was expecting to take orders from the beginning of 1980. Even so, it wasn't initially expecting to ship until April, a timeframe that this advert appears to extend by suggesting deliveries in "four to five months", or around June/July.

The Model II was designed to "start from the upper limit of the Model I" and it was claimed would run 2.5 times faster than the original. It was also suggested by Ted Russell, the director of Tandy's computer division that it would be comparable to IBM's up-coming 5110 (the original IBM PC), HP's H9800 and Wang's WCS15[1]. With 32K and 500K of floppy storage, the entry-level Model II was expected to retail at £2,000, or around £9,880 in 2021.

At the same time as this announcement, Tandy reduced the price of the original TRS-80 by around 10%, but was otherwise intending to keep selling the original model. The company was also opening specialist TRS-80 "microcomputer centres" around the UK - four were already open in Bradford, Bristol, Birmingham and Manchester, with more planned along "the length and breadth of Britain"[2].