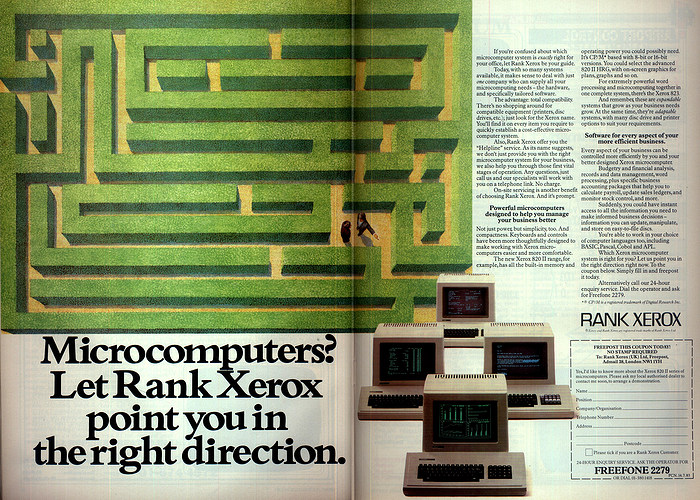 Microcomputers? Let Rank Xerox point you in the right direction

Hugely influential in the early computer industry with its Palo Alto Research Center (Xerox PARC) spawning computer fundamentals like Ethernet, Laser printers and the graphical user interface (a preview of which was said to have, er, "influenced" Apple), Xerox as a computer manufacturer never quite lived up to their original Xerox Alto - one of the first computers designed, in 1973, for "individual use"[1], including a GUI and Douglas Engelbart's mouse. Mice starting appearing commercially during the early 1980s, but were still something of a luxury. In July 1983, Televideo announce a mouse which would be available in autumn of the same year for £103.45 (about £350 in 2021 money!) Microsoft were also working on a mouse - theirs was due to be available at the bargain price of £140 (£480) and Texas Instruments were working on their own model[2].

Meanwhile. the advert shows Xerox's 820 series, which at the entry level was a fairly conventional (and non-IBM compatible) business machine with a pedestrian 2.5MHz Z80 running CP/M. The slightly better 820-II had an improved 4MHz processor and double-sided double-density 8" disks[3]. It was released in 1981 and the range was discontinued in 1985, when Xerox exited the PC market.[4]