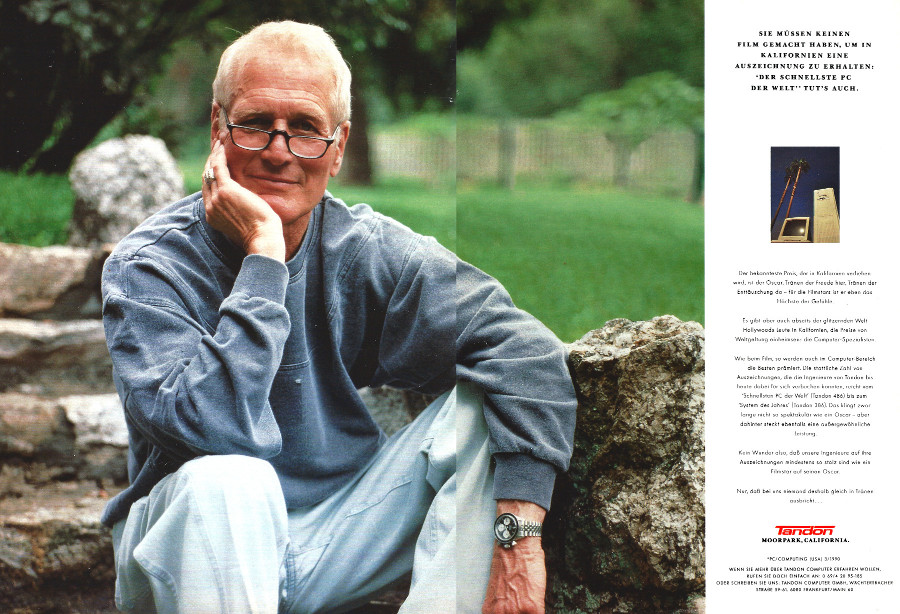 This advert from German magazine Der Spiegel continues a frequently-visited meme of microcomputer advertising - that of wheeling in some celebrity with sometimes only a tenuous connection to micros in order to sell them. Perhaps some of the most famous examples include William "Captain Kirk" Shatner advertising the "honest-to-goodness" Commodore VIC-20 and, in the UK, Ronnie Barker advertising Commodore PETs. But there were others, such as Alan Alda and Harry Morgan of TV's M*A*S*H, promoting Atari and Commodore respectively.

However, this advert certainly raises the celebrity goalposts in its use of world-famous Hollywood legend Paul Newman, although there's no mention of any connection with Newman and Tandon, other than the former is a Hollywood actor and, apparently, the prizes of "fastest PC in the world" (for its 486 machine) and "system of the year" (for its 386), were just like winning an Oscar.

Tandon - one of innumerable IBM PC clone manufacturers - ended up becoming Europe's biggest producer of PC clones, at least for a while during the mid 1980s. It was also something of a destination for employees of other companies, including Chuck Peddle - designer of the legendary 6502 processor and certainly high on the list of candidates to be considered the father of the PC, as he also championed the world's first true PC, the Commodore PET.

Peddle ended up having something of a turbulent time with Commodore, having left the company to join Apple, because he didn't agree with the shift in focus to home computers in the shape of the VIC-20, before returning briefly. He left again, along with Commodore financier Chris Fish, to start Sirius, which produced a machine - the Sirius 1 - which for a while out sold IBM's PC in Europe, even though it was not even an IBM compatible.

The complex arrangements that Sirius had with its original OEM manufacturer, Victor, which was selling the same machine in the US under its own name as the Victor 9000, eventually turned sour[1] and Peddle moved to Tandon around the beginning of 1985, after Sirius had gone into Chapter 11 bankruptcy protection at the end of 1984.

Peddle stuck around with Tandon for several years, becoming the company's president, but by the late summer of 1988 he was moved sideways to become "adviser and consultant" to the chief executive Sirjan Lal Tandon. This appeared to be a relief to the staff of Tandon as Peddle had a reputation - not unlike that of Chris Curry of Acorn - of insisting that nothing was done unless he did it himself.

Tandon had been trying to release a pioneering removable hard disk unit, but it had been delayed whilst it was beta-tested to ensure that it really did work with all the 286 and 386 machines on the market - testing that, according to Guy Kewney of Personal Computer World, should have been done the year before.

It was this sort of delay that prompted Peddle's move away from day-to-day management to the sort of strategic thinking he was considered much better at. There was however some nervousness that Peddle might take it the wrong way, as having started several companies already he might think nothing of jumping ship again to start again[2].

Meanwhile, the project that led to the IBM PC, which eventually swept away Sirius's machine in Europe, had been managed by Bill Sydnes - the first man that William Lowe - father of the IBM PC - had recruited for the company's "skunk works" project at its Entry Level Systems offshoot in Boca Raton, Florida.

Sydnes, who had been at IBM for some 18 years, eventually left Big Blue during the PCjr fiasco and moved to Franklin, a company famous for its illegal clone of Apple's Apple II machine. When Franklin declared bankruptcy, Sydnes, along with Dan Wilkie and HL Sparky Sparks, ended up at Tandon[3], surely completing some sort of golden circle, not least as it involved the two most cloned machines of all time - the IBM PC, and to a lesser extend the Apple II.