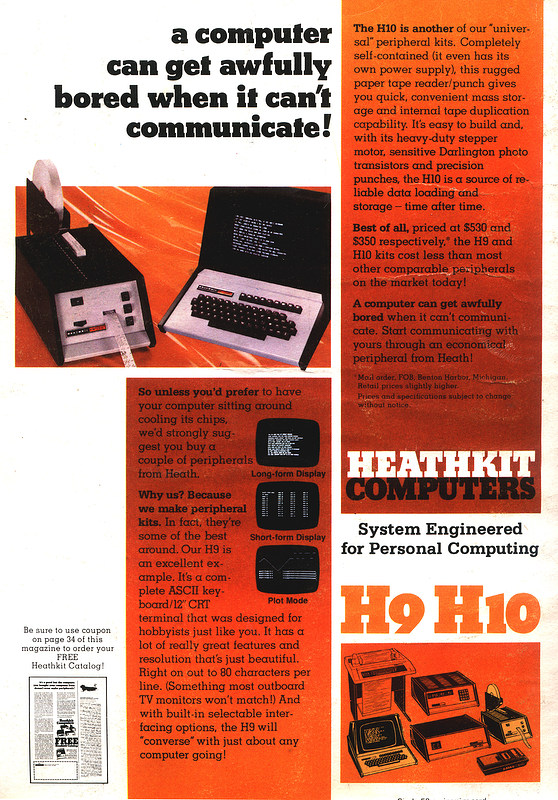 "A computer can get awfully bored when it can't communicate!"

Heathkit were another of those companies better known for their consumer and technical electronics, but who jumped in to the market opened up by the MITS Altair 8800. This advert is actually for a couple of peripherals: the base system was the Heathkit H8, but it was fairly useless without a means of input and storage, hence this ad for the H9 Video Terminal and the H10 Paper Tape Reader. The latter is interesting in its own right as it's the only reference I've come across to the continued use of paper tape as a storage mechanism at this point in the development of computers - everything else was already using 5.25" or 8" floppies. Perhaps it's the price - at $350 (or about £1,200 in 2011 money) it was cheap compared to a thousand-dollar floppy unit.

Heath - the company behind Heathkit and which was owned by Schlumberger - was taken over in January 1980 by Zenith Radio[1]. Schlumberger itself had only just acquired legendary U.S. chip manufacturer Fairchild - the company that spawned the semiconductor, AMD and Intel, amongst a host of others. Following the acquisition, Zenith continued to sell Heath's H100 computer, re-branded as the Zenith Data Sytems' Z-100