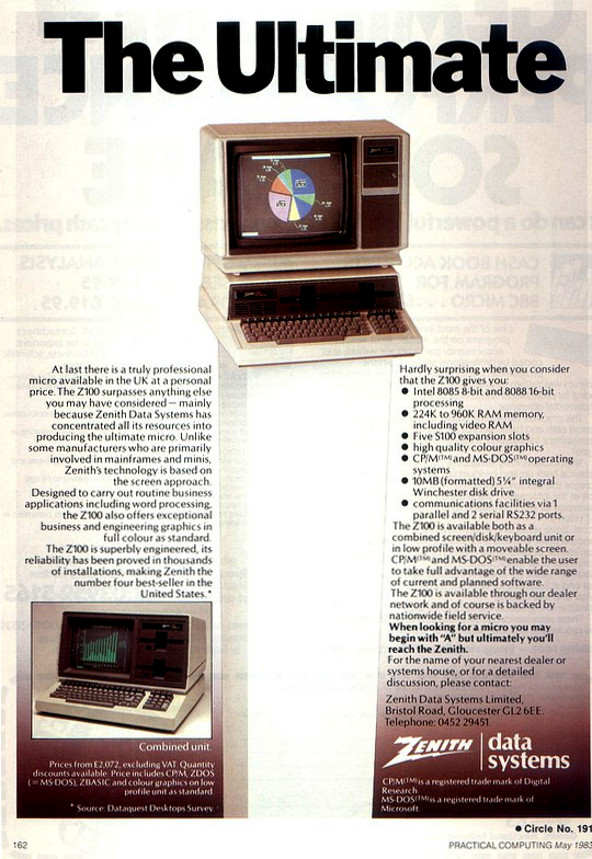 One of a myriad of IBM-PC-like machines around during this era, although pitched more as an alternative than a compatible machine, the Z-100 was actually the pre-built version of Heathkit's H100 kit computer simply branded as Zenith Data Systems. The 60-year-old US Zenith Radio Corporation had bought the Heath company from Schlumberger at the beginning of 1980, shortly after Schlumberger had acquired the legendary Fairchild Semiconductor. Schlumberger's selling of what was claimed to be the number four US micro company just after buying a chip company struck some observers as odd, although there was some rationalisation planned at Schlumberger's HQ. Fairchild was also reconsidering a joint-venture with the UK's GEC, in which the two were planning to build a factory near Liverpool[1].

The Z-100 sported two processors - Intel's 8085 for 8-bit and the 8088 - a variation of the 16-bit 8086, although it only had an 8-bit external bus. The machine kept with the tradition of the last 8 years or so in having an S-100 bus, making it more like 1976's Altair 8800. It could run CP/M or a vaguely MS-DOS-like OS called Z-DOS, which the advert claimed was directly comparable, and came with an integrated 11MB 5" Winchester disk drive and could take up to 1MB RAM. Its graphics were particularly good for the time, with a resolution of 640x512. This compared well to the IBM PC standard at the time - CGA, which had only 320x200 pixels - and meant that there were even early versions of AutoCAD running on the Z-100[2]. Mind you, it needed to be good with a price tag of £3,925 - about £13,500 in 2021 prices. Despite the price, it reviewed as being "too old to be IBM PC compatible" but nevertheless was "an office personal computer and, as such, is good value"[3].

Zenith as still plugging away in the IBM PC clone market in 1987, when it launched its Eazy PC - a machine which went up against Amstrad's PC1640, with Phillips and Drew analyst Ruth Keattch observing that "the Amstrad seems to offer no advantage whatsoever". Various models of the Eazy PC were available, all of which had 512K memory as standard, but which varyied by the amount and type of disk storage available - from the basic £587 model with a single 720K 3½" floppy (£1,670 in 2021) up to a 20MB hard disk. Zenith was also keen to point out that the Eazy PC would be upward-compatible with IBM's forthcoming PS/2 system, with UK MD Clive Taylor saying "The Eazy PC is an entry-level system for serious professional and corporate users with consistent upgrade to Microsoft Windows 2, Windows 386, OS/2 and SAA"[4].