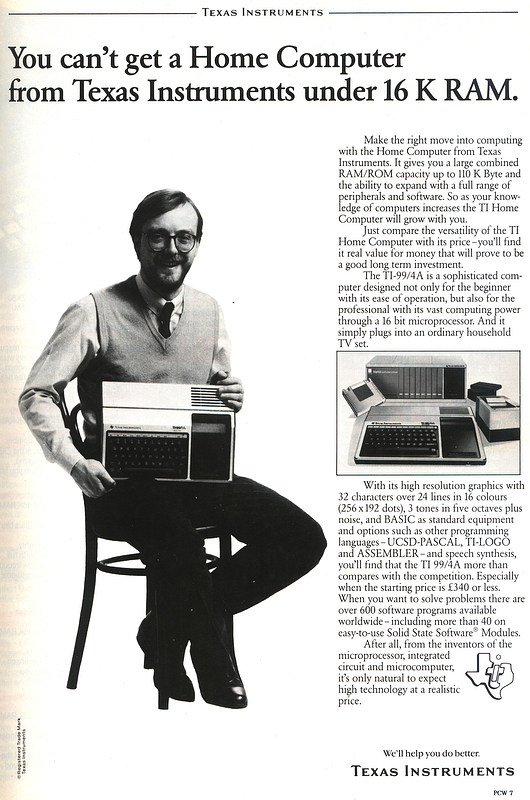 The problem with the original model was that it only output video using the North American NTSC standard, so for the UK market it either required a modification to the user's PAL television, or more generally required that the micro came bundled with a suitable telly. This meant that the price ranged from about £750 in 1980 (£3,700) including a black-and-white set up to £1,300 (£6,420) for a dual-standard colour TV with Viewdata. As the review of the machine in May 1980's Personal Computer World concluded, "it certainly has a lot to offer [but] the question is - are people in the UK ready to spend this sort of money on a home computer?"[2].

By the summer of 1982 the 99/4A's price was cut to first £315 and then £199 as the long-expected price war in the micro industry kicked off. Often credited to Commodore's decision to drop the price of its VIC-20, and also involving Atari which dropped the price of its Atari 400 from £300 to £200, TI's marketing manager Irfan Salim claimed that a "a quickly developing UK market and resulting sales" had allowed TI to drop its price, before conceding that the competitive market in the UK had been "a major determining factor"[3]. A few months later Salim was reporting that the home computer market "had gone very quiet for TI". This conincided with TI offering a £50 cash rebate for its machine as an attempt to prop up sales in the run up to the all-important Christmas period. The company had been faced with the choice of price cuts or heavy advertising, but figured a rebate was the quickest way to the customer - at least until it had decided whether or not to make the reduction permanent. According to Salim, the same tactic in the US had led to an eight-times increase in sales[4].

This advert is also a bit controversial in TI's claim to have invented the first microprocessor. Whilst TI had created the first "solid circuit" on the 12th September 1958[5], it wasn't a design that was practical to actually manufacture. TI's first real IC was introduced in 1961, but meanwhile Fairchild's Robert Noyce[6] and a team of engineers had produced the first working monolithic integrated circuits in May 1960[7]. Noyce went on to co-found Intel, which is generally credited with the first commercially-available microprocessor - the Intel 4004, launched in 1971[8]. TI had already created the TMS 1000 (considered more of a microcontroller), however this wasn't commercially released until 1974[9]. According to that Wikipedia article "We may never know which company actually had the first working microprocessor running on the lab bench".

It was suggested that TI had thrown away a possible early lead in the micro market as companies which had seen three prototype micros that TI had developed had been impressed, and it was forecast that TI could dominate the industry within 18 months. However TI apparently failed to release the two more powerful machines and messed around with the specification of the third, before announcing that actually they were going to design a completely new micro for the home market instead but that it wouldn't be around for another two years. The reason given was that this would all be too damaging to TI's profitable mini-computer business, a conclusion which didn't go down well with their head of the micro project - Robb Wilmot - who resigned and came over to the UK, becomming MD of ICL two years later in 1981[10], where he turned the bankrupt 33,000-employee behemoth in to a success[11].