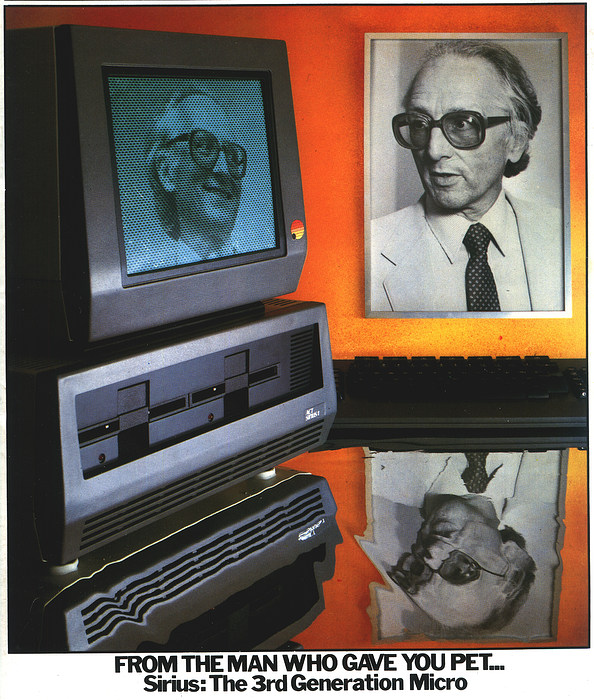 In the year that the IBM PC was finally launched in the UK comes this advert for the ACT Sirius 1. It was designed by 6502 and Commodore PET legend Chuck Peddle, who had acrimoniously left Commodore in October 1980, at least in part because Peddle disagreed with the decision to concentrate on the VIC-20 at the expense of Commodore's business computer line. After leaving Commodore, Peddle formed Sirius Software along with former Commodore financier Chris Fish and a few other engineers that Peddle took with him[1].

Peddle graduated in Engineering Physics in 1959 and then workedfor General Electric for eleven years. In 1970 he started up a company producing terminals, before launching a word-processing business in 1972. After that, he joined Motorola and became involved in designing the 6800 series of processors. Seeing an opportunity in the market for a processor cheaper than $200, Peddle left Motorola, taking a team with him, and joined MOS Technology, in order to develop his cheap processor. The result was the 6500 series, which Peddle designed - the 6501 being a pin-identical drop-in replacement for Motorola's 6800, whilst the 6502 had its own layout. Luckily for Peddle, when Motorola sued over the similarities of the 6501, it let MOS keep the 6502. It was said that Peddle's ability to sell this processor for $25 made the personal computer possible[2]. After Commodore bought MOS in 1975 in order to secure access to the calculator chips it depended on, Peddle took the 6502 and developed first the KIM-1 and then the PET - the world's first personal computer - around it.

The eight-person design team for the Sirius 1 formed towards the end of December 1980, with the company - Sirius Systems Technology - formally starting operations in January 1981. By April 1981 it already had its first prototype. Peddle didn't get as involved with the design of the Sirius as he had previously, for instance on the PET, but drew satisfaction from bringing together a diverse team of people - from the designer of the VIC-20 to specialists that understood IBM communications[3]. Peddle's new machine was built and marketed in the US - as the Victor 9000 - by Victor Business Products, an offshoot of the office equipment and desktop calculator company Walter Kidde, which was looking for a computer to add to its product range[4], whilst in the UK it was distributed by Applied Computer Techniques (ACT) as the Sirius 1. As it preceeded the IBM 5150 by several months it built up quite a lead and was a bestseller for a time[5].

It had a very high specification for its day, including an 800x400 pixel display, nearly 1Mb memory and had a large software library thanks to its ability to run both CP/M-86 and MS-DOS. The choice of processor which enabled this - the Intel 8088 - came about after considering a dual 6502 configuration, a 6502/Z80 dual-processor setup and the Motorola 68000. The former had been ruled out as the developer base was virtually non-existant, at least in the US. The Z80/6502 combo was common enough but as the chips were both 8-bit, they could only address 64K of memory without faffing around doing paging, and 64K was already seen as too small to do anything useful. The 68000 on the other hand was a full 16/32-bit chip, however Peddle's team concluded that it would never be as cost-effective as Intel, plus at the time Intel had a much more agressive road-map for its processors.

Although Victor Technology achieved sales of $65 million in 1983, the company filed for bankruptcy in 1984, in the era of the great computer company shake-out that saw Sinclair sold to Amstrad, Acorn bought out by Olivetti and many other companies just disappear altogether.

The first image in this set is actually from the cover of the issue of Personal Computer World that the advert was placed in, and shows Chuck Peddle's photo, together with a digital image of him on the screen of the ACT Sirius 1. It retailed for £2,395 - nearly £8,960 in 2022 money.

ACT, the Sirius' distributor had another Commodore connection - in 1979 their Petsoft software subsidiary was churning out software for the PET. These "versatile low-price business programs", which included a "powerful Percentage Costing package" retailing for £50 (£280), were said to be helping make the PET an increasingly popular accounting tool for small businesses[6]. Petsoft had also been involved with Adam Osborne, of Osborne 1 fame, when they got together in the summer of 1979 to publish the BASIC programs from Osborne's book "Some Common BASIC Programs" together on one cassette[7], which retailed for £15, or £84 in 2022 money.