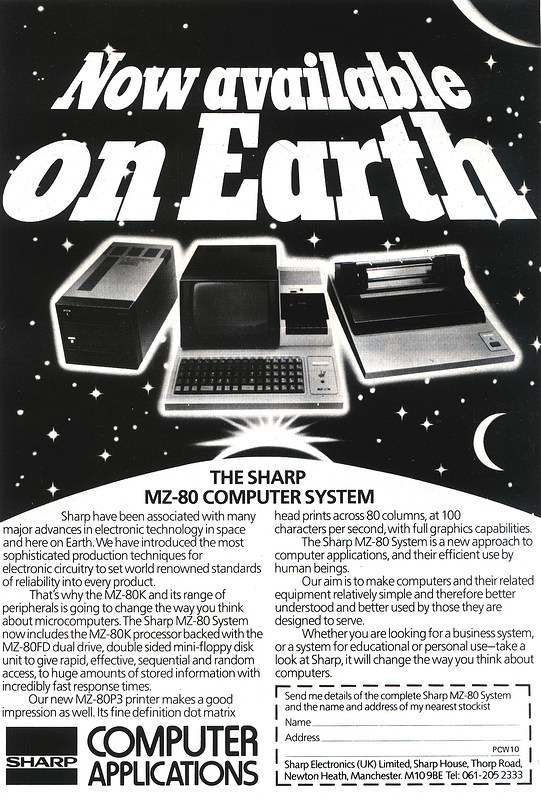 Another advert from Sharp that implies some sort of extra-terrestrial origin for their computer. This particular machine, which had actually been around since October 1979, where it had been launched at the Birmingham International Business Show[1], was Zilog Z80-based and had about 32K of available memory. Unusually, if you wanted to program in anything other than Assembler or machine code, you had to load your program of choice (BASIC, Fortran, etc) from cassette. It also had an awkward non-standard keyboard and, like the Commodore PET of 1977, could only natively draw in-built characters[2]. By the end of 1981, it was retailing for £530 - about £2,220 in 2022 terms.

Sharp were particularly strict about the dealers they would allow to resell their machine, in an era which was somewhat notorious for the "sell and forget" sort of attitude where after-sales support was often non-existant. Guy Kewney wrote in the December 1979 issue of Personal Computer World about letters from suppliers referring to rivals who outright refuse to provide service, and other who would lie about competitors' service charges or even that competitors would not be able to provide any sort of after-sales service or support[3]. Sharp's Paul Streeter said that "we feel that a lot of the problems in this industry in the last 18 months have been due to suppliers who have appointed distributors without checking their ability to back up the equipment", with Sharp also said to be insisting on software back-up skills as well as hardware maintenance ability. In fact by the end of 1979, having turned down several applications, they had only appointed one dealer - HB Computers of Kettering in Northamptonshire[4].