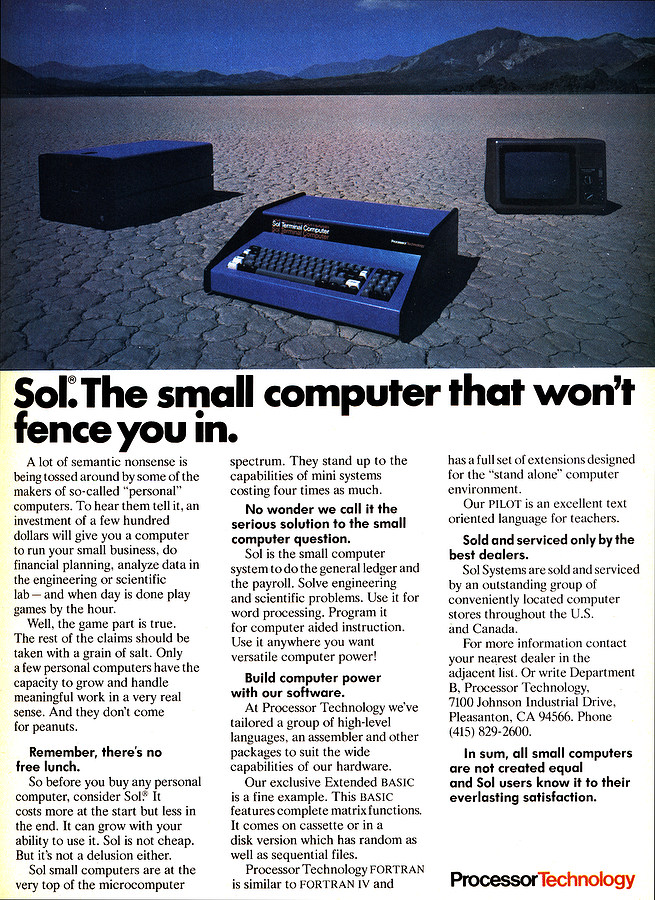 Sol. The small computer that won't fence you in

An interesting advert, nicely shot on a dried lake somewhere in the American south west, that's quite honest, for a change, about the fact that it's not particularly cheap and which disparages the often over-egged claims from many competitors about their systems. It was an Intel 8080 system running at 2MHz and was apparently unusual in having a built-in composite video driver[1]. About 10,000 Sols were produced[2], mostly in the form of the Sol-20 "Terminal Computer". The system retailed for $1295 assembled (as at June 1, 1977) - that's about £5,230 in 2021 terms.

Processor Technology, the company, had been set up by Gary Ingram and Robert Marsh[3], the latter being a member of the famous Homebrew Computer Club. The company's first product in 1975 was a 4K static memory module for the MITS Altair 8800, which sold for $225, or about £1,520 in 2021 money , but they were up to 16K a couple of years later. Processor Technology became one of the most successful Altair expansion-board suppliers - it was noted at the time that whilst MITS relied on extras, like memory boards, to make any profit, many users would buy the machine and go straight to third parties like Processor Technology for their more-reliable memory modules. At the same time these owners would likely get a "borrowed" copy of Micro-Soft's Altair BASIC to run on it - Wikipedia notes whilst MITS were selling about 1,000 machine a month, sales of the BASIC that went with it were in the low hundreds[4].