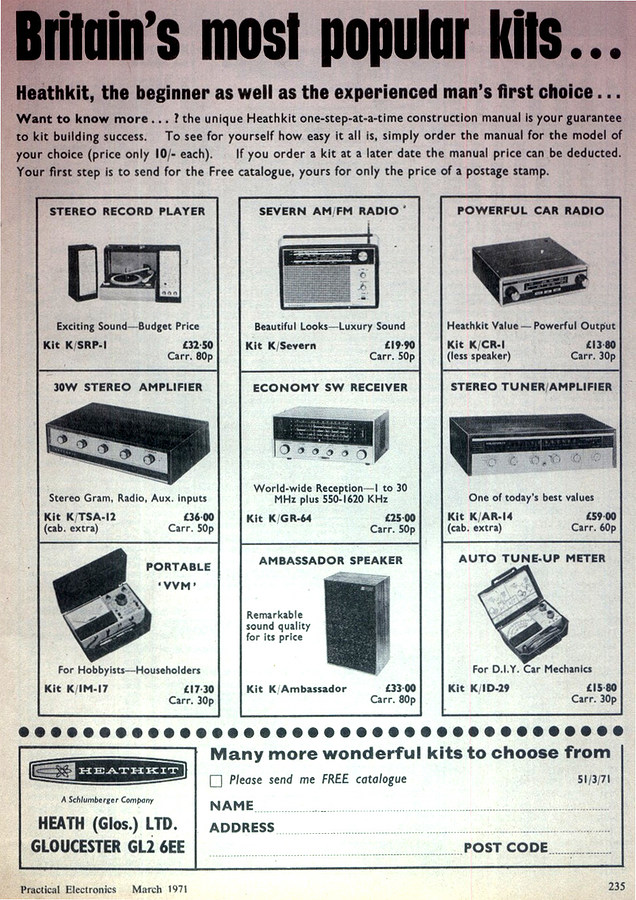 Heathkit was an American company that was originally founded in 1912 as the E. B. Heath Aerial Vehicle Company, an aircraft manufacturer, based in Chicago (this gives Heathkit one of the more ancient lineages of any computer company, comparable to Tandy's 1919 incorporation or IBM's 1911 start). They branched out in to electronics kits just after World War II, following the purchase of lots of surplus electronic components, but wouldn't produce a computer until 1977's Heathkit H8 - a computer similar in concept to the famous Atair 8800 (switches for input, S-100 bus), but for which you could also buy Heathkit peripherals like the H9 terminal and H10 paper-tape reader. Anyway, this advert shows several popular kits that were available in 1971, including an FM stereo tuner/amplifier. Heathkit's kits were often considered to be of high quality and their stereo/hifi kits were popular with audiophiles who, as long as they could follow instructions carefully, could produce something that was of a similar quality to a factory unit for a lot less (even so, the tuner still cost £59 - about £890 in 2020 money, and the cabinet to put it in was extra). There's more on Heathkit at Wikipedia