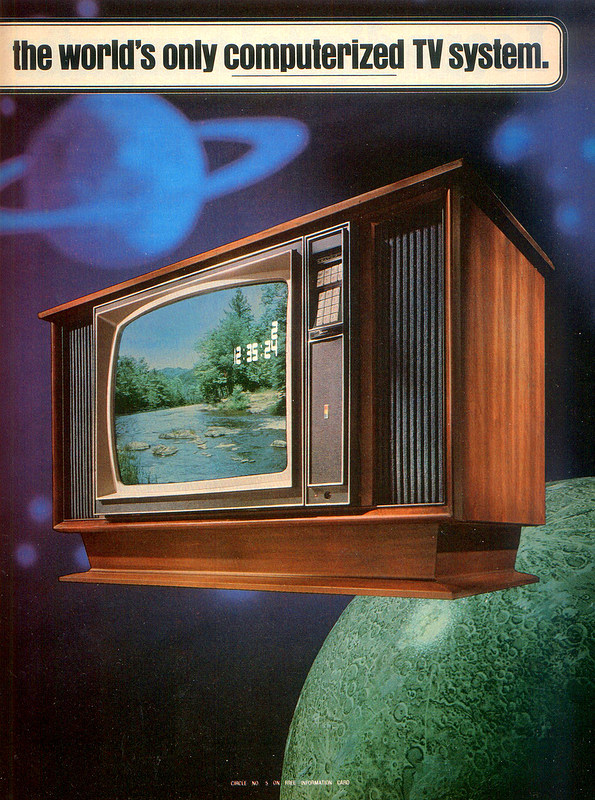 A great advert for the space-faring TV-as-furniture model GR-2001 from Heathkit, the electronics kits and projects company who joined the burgeoning computer market opened up by the MITS Altair 8080 in 1975. Perhaps uniquely for a TV (at least at the time), it contained static NMOS RAM and a way to program in an "entire evening's viewing" - a feature that perhaps didn't really become commonplace until the advent of the VCR in the early 1980s. It provided an overlaid text to display the programs stored and even an automatic antenna rotor control, which provided a way to physically drive the aerial to point to different locations in order to recieve particular channels. True to form, this TV was actually offered in kit form (apparently, in something of a grand understatement, it was one of Heathkit's "more complex kits") for the price of $700, or about £3,840 in 2020. This included the chassis, the picture tube and one speaker, but not the case to put it in, and it weighed in at a substantial 146 pounds (66kg) - the weight of an adult. It's hard to imagine the nanny state even allowing a kit-form TV to be sold now - a cathode ray tube required in the region of 15-35,000 volts to operate.