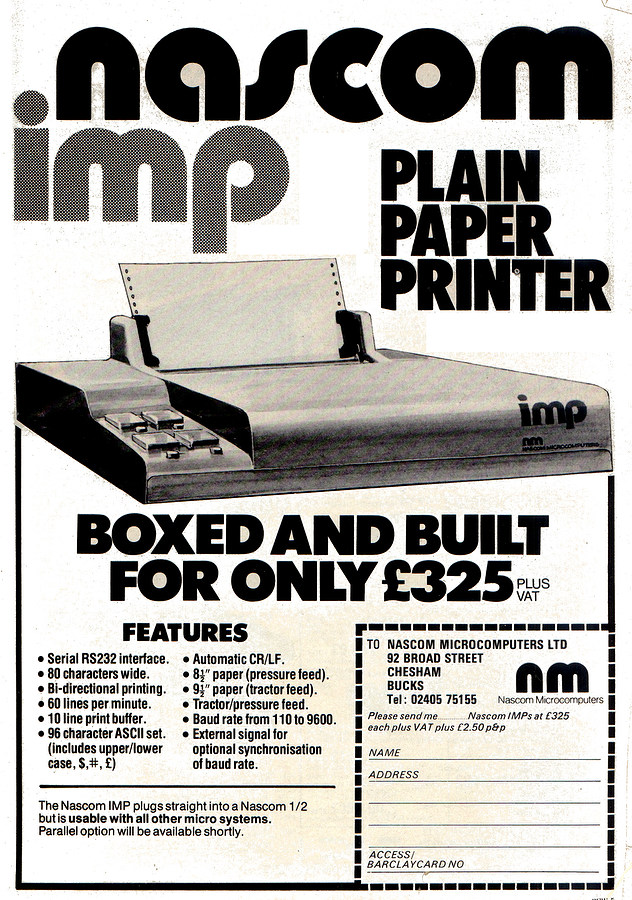 Nascom Imp plain paper printer - boxed and built for only £325

1980 was perhaps the year of the rise of the printer, but at the time these were still very much in the realms of "expensive" - much like floppy disk drives before them, where the peripheral cost more than the computer it was attached to. Nascom's serial Imp printer - one of the first affordable "small" printers to reach the market[1] - was at the cheaper end of the scale, coming in at about £375 including VAT, or about £1,850 in 2021 money. This compared, perhaps unfavourably, to the price of the Nascom-1 to which it could attach - available for only £160 (£790) - or even the newer Nascom-2, which was £340. Elsewhere in the same edition of Personal Computer World that this advert appeared in, Parameterised Computer Systems was offering an otherwise standard (albeit with an IEEE interface) dot-matrix printer for the more business-oriented Commodore PET for £550 - an eye-watering £2,710 in 2021[2]. Compared to that, the price for the Nascom was a complete bargain as it had the added bonus of being actually already built.