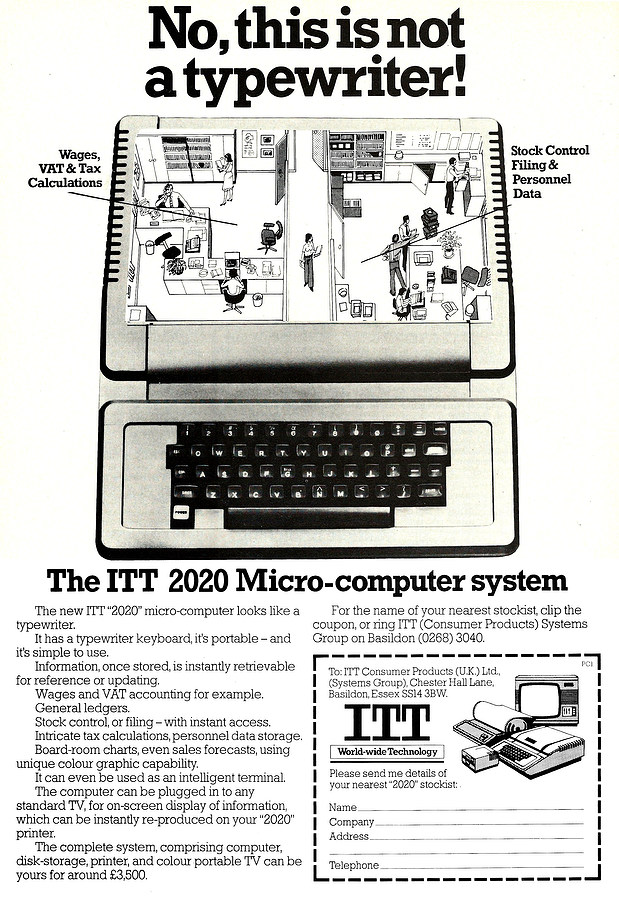 No, this is not a typewriter!

The ITT 2020 is particularly interesting as it was the first officially-licenced Apple II Plus clone made specifically for the European market. Despite being a clone, it differed in a few important ways, the most significant of which was that it produced European PAL video, rather than the native NTSC (Never Twice the Same Colour) format that the Apple used. This required that the hi-res video on the machine was of a higher resolution than the normal Apple, making any software that used hi-res graphics incompatible unless the program was written in Basic, in which case the different interpreters on each machine would sort the problem out, or machine code programs kept to coordinates less than 280. Also different was the built-in character set, where the original Apple was said to be more legible, although both machines rendered text poorly in colour. The ITT's NTSC to PAL conversion made more of a hash of Apple's complex colour-setting algorithm which claimed 53,760 screen pixels but which, similar to Sinclair's Spectrum, could only render colour in seven sets of 7,680. This made many adjacent colour-combinations appear as white. The ITT also needed slightly more hi-res memory, which required an extra 8K RAM chip latched in such a way as to provide a 9th bit for every video byte. Turning on or off the latched bit for every pixel, as well as the extra number of total pixels, made the ITT slightly slower than the original Apple. Otherwise, the answer to "one of the great micro mysteries - what is the difference between the two Apples" was "not much". Bryan Spielman, writing in Practical Computing, concluded of his detailed nit-picking analysis that "[the two machines] are so good that they merit this kind of scrutiny".

The deal with ITT came about because, in the words of Steve Jobs, Apple was "a new struggling company with few resources and [ITT] was a big consumer group with manufacturing and marketing ability in Europe". Apple had originally given ITT a set number of motherboards to which ITT added European power supplies and video cards and sold them as the 2020. The deal effectively came to an end when ITT's stash of boards ran out and when Apple announced plans for a production facility in Cork, Ireland during a visit to London by Jobs and former Intel executive and Angel investor Mike Markkula in the summer of 1980 - news which appeared to come as a surprise to ITT. The visit to London was primarily to announce the Apple III, so whilst there was still some confusion about whether ITT would get a new contract and Apple was just playing hardball in order to secure better terms, Jobs put the boot in by stating that "ITT will not get the rights to the Apple III". As well as dropping ITT, Apple's independent California-based Eurapple subsidiary was being axed. On the upside, it was expected that the Cork factory, with the addition of a European marketing function, would employ up to 1,430 people[1].

Apple had a somewhat chequered history with clones, at first allowing and licencing them, but then turning on them, especially when unofficial clones like the Franklin Ace 1200 were being sold. The Franklin case proved important to the history of computers as Apple had sued the company over software copyright. At the time, Franklin was using the defence that software was not generally printed out so it couldn't be copyrighted, a position that the Philadelphia Federal Appeals Court eventually disagreed with when it issued its famous "the medium is not the message" summary in September 1983[2].

Oddly, the advert doesn't actually mention any of this Apple compatibility, instead opting to mention how unlike an actual typewriter the 2020 is. The whole system, including disk, printer and a colour TV was available for around £3,500 - a suitably Apple-ish £17,300 in 2020 money.