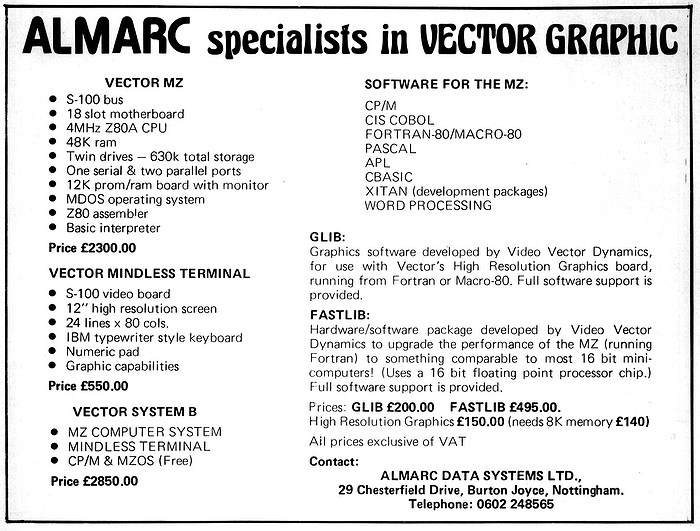 Vector Graphic were an American company set up in 1976 by two housewives. They were distributed in the UK by Almarc Data Systems, a company initially based in Burton Joyce near Nottingham in England and who were around until at least 1982. The Vector MZ was an S-100 bus-based system running the faster Z80A (at 4MHz). It had 12K PROM with 48K RAM and MDOS (Micropolis Disk Operating System, not to be confused with the later MS-DOS). As it was Z80, it could also run CP/M, so the advert gives a list of generally-available CP/M software. The Vector MZ retailed for £2300 - about £12,800 in 2020 money, but as well as that the company also offered the amusingly-named "Vector Mindless Terminal" for an additional &pound500 (£3,080 in 2020). This too had an S-100 bus to support the video board as well as an IBM typewriter-style keyboard (as in an actual typewriter). The optional bundle of the two together was rather tightly sold for exactly the same price as the two separate components added together. The final options were for two graphics packages, one of which required an additional 16-bit floating-point maths processor. Having a separate chip to handle floating-point maths was a model which continued until the launch of Intel's 486DX in 1989. Apparently, this harware/software add-on combination gave the MZ a performance similar to real 16-bit machines, which had been in various forms since the late 1960s but which were becoming more common thanks to chips like Intel's 1978 8086 (itself apparently developed to fend off the challenge from 1976's Z80)