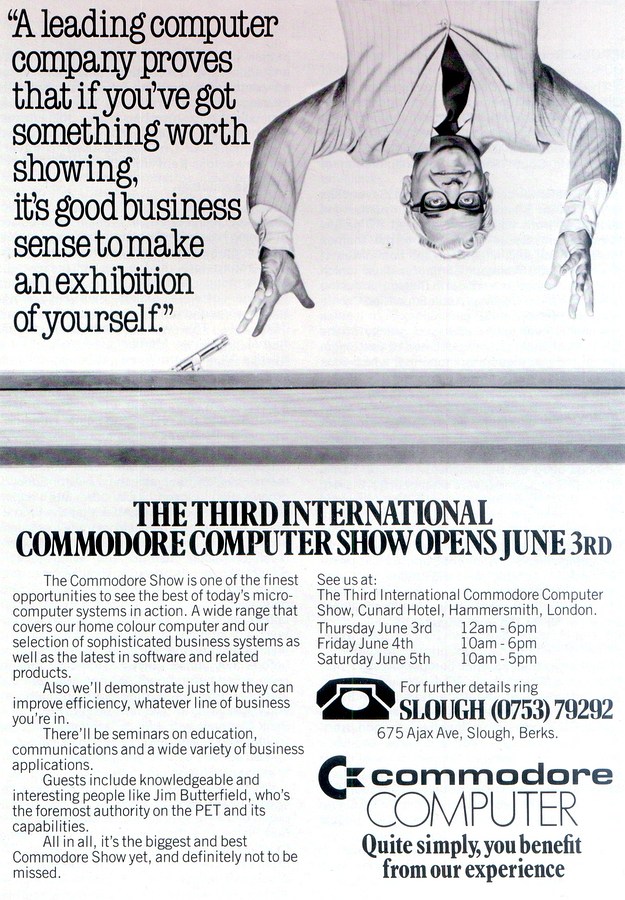 Commodore: If you've got something worth showing, it's worth making an exhibition of yourself

An advert for the third International Commodore Computer show, held at the Cunard Hotel in Hammersmith, London, featuring an upside-down Ronnie Barker. Ronnie Barker had already featured in several adverts for the PET, at about the same time that William "Captain Kirk" Shatner was doing the same for Commodore in the US. The VIC-20 ("our home colour computer") was featured at the exhibition, as well as presumably the whole range of PET business machines and peripherals.

During the financial year up until the end of June 1982, Commodore's net sales totalled $304.5 million (a 63% increase over 1981), of which the Commodore microcomputer range contributed $228.2 million (about £500 million in 2013 money). "Rest of world" showed a 35% increase in sales, whereas the US had increased 300% (this discrepancy probably reflects the fact that the US had a head-start when it came to the micro revolution, rather than any particular lack of competition). It had also increased the capacity of MOS Technology, the company it bought in 1976 in order to help it fend of competition in the calculator market, by 150%. This included increasing the wafer size of MOS's Cost Mesa production facility to 5", each of which could produce up to 782 16K ROM chips aaginst 496 on the previous 4" wafers[1].