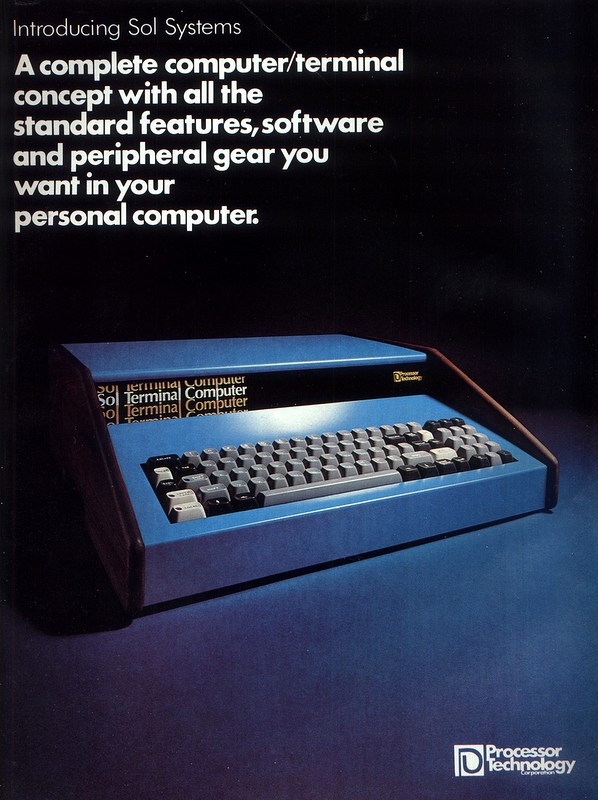 The Sol-20 was one of the last systems, for a while at least, that came without a resident interpreter - you had to load BASIC from tape or floppy every time you booted the machine up. The 3rd-generation machines that would appear in a few months' time (the Commodore PET, Apple II and TRS-80) would differ not least because their BASICs were stored in ROM and so were ready to go when the machine was turned on, an approach became the default for the next five or six years, before the IBM PC put everything a step backwards by reverting to the "boot then load something afterwards" convention.

The 9080A CPU mentioned in the advert is actually AMD's first 8080[1]-compatible processor, which was initially built by reverse-engineering Intel's original. They were produced from September 1975, and by 1976 AMD has a cross-licence deal and so had become an authorized second-source manufacturer - just like Synertek and Rockwell were for MOS Technology's 6502. This agreement came to an end in 1988 at the advent of the 386 processor, when Intel decided that it wanted its market back.

By the time of the 80286, Intel only had 70% of the market for what was essentially its own chip, with the rest made up of AMD, Harris and a bunch of other second-sourcers. Not only that, but the vigorous competition often meant that these other companies would cut their prices in order to gain a bit more market share, leading to lower revenues for Intel, which was forced to keep up. So the company decided that from the 386, there would be no second sourcing, which really meant that Intel could keep its prices up for as long as it wanted. By the summer of 1988, an 80286 was selling for less than $30, whilst Intel's own hobbled version of the 386 - the 386SX (or "Essex" as Guy Kewney of Personal Computer World liked to call it) - wasn't expected to drop below $100 until a year after its launch, or around the end of 1989. The full-fat version of the 386 wasn't expected to be much less than $200[2].

Meanwhile, in a comparison of the 386SX and its larger sister, Kewney hinted at the passing of an era when people really built their own computers from parts, writing "Nobody could mistake one for the other. Whereas the 386 is an enormous package with 132 pins pointing straight down, the SX hardly looks like a chip at all. It has 100 filament-fine whiskers all around the edge and is tiny by comparison with its big brother ... you wouldn't be able to solder one by hand".

Processor Technology, the company that produced the Sol-20, started out in 1975 manufacturing memory and other I/O boards for machines like MITS Altair, which shared the same S-100 bus architecture, as well as the first S-100 video display - the Sol-20 was still fairly unusual for computers at the time in coming with a video display as standard, as these were mostly optional extras, even for systems like the Apple 1. About 10,000 Sol-20s were apparently made, but the company didn't adapt to the third generation of computers and went bust in 1979[3]. An article in Personal Computer World titled "Save our Sol" alludes to this as UK S100-bus specialist Cromart had started manufacturing Processor Technology's video display monitor, having bought the rights after the company failed[4].