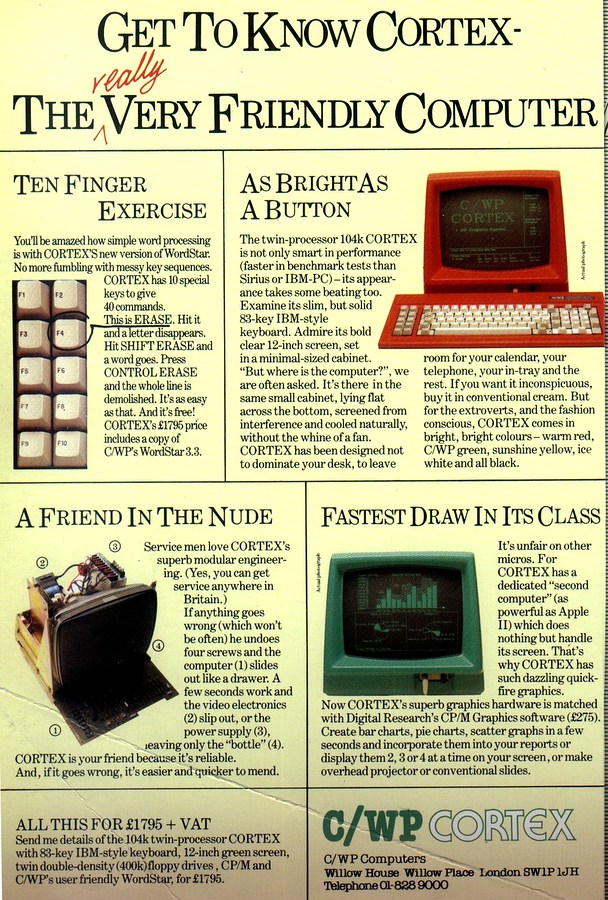 Get to Know Cortex - the Really Very Friendly Computer

An interesting advert for a forgotten machine - imported by C/WP from Ontel in the US. In many ways it provides the template for the Apple iMac, which wasn't released until 1998 - some 15 years after the Cortex was first released in 1983 - what with its all-in-one monitor/base-unit design, a choice of case colours (red, green, sunshine yellow, ice white, all black and beige) and even the "friendly computer" reference, even though that had already been used by Commodore as part of its VIC-20 campaign.

It was a dual-processor machine, using a 4MHz Z80 as its main "program" CPU and a 6502 (which ran entire computers like the VIC-20, Apple II and BBC Model B) just to drive the display, and shipped with 64K memory, plus another 40K for the screen. The choice of sticking with 8-bit processors in the era of the 16-bit IBM PC was apparently down to the large array of software already available for 8-bit CP/M, which at least included a custom version of legendary early word-processor WordStar. It retailed for £1,795 + VAT - around £6,800 in 2021 money.