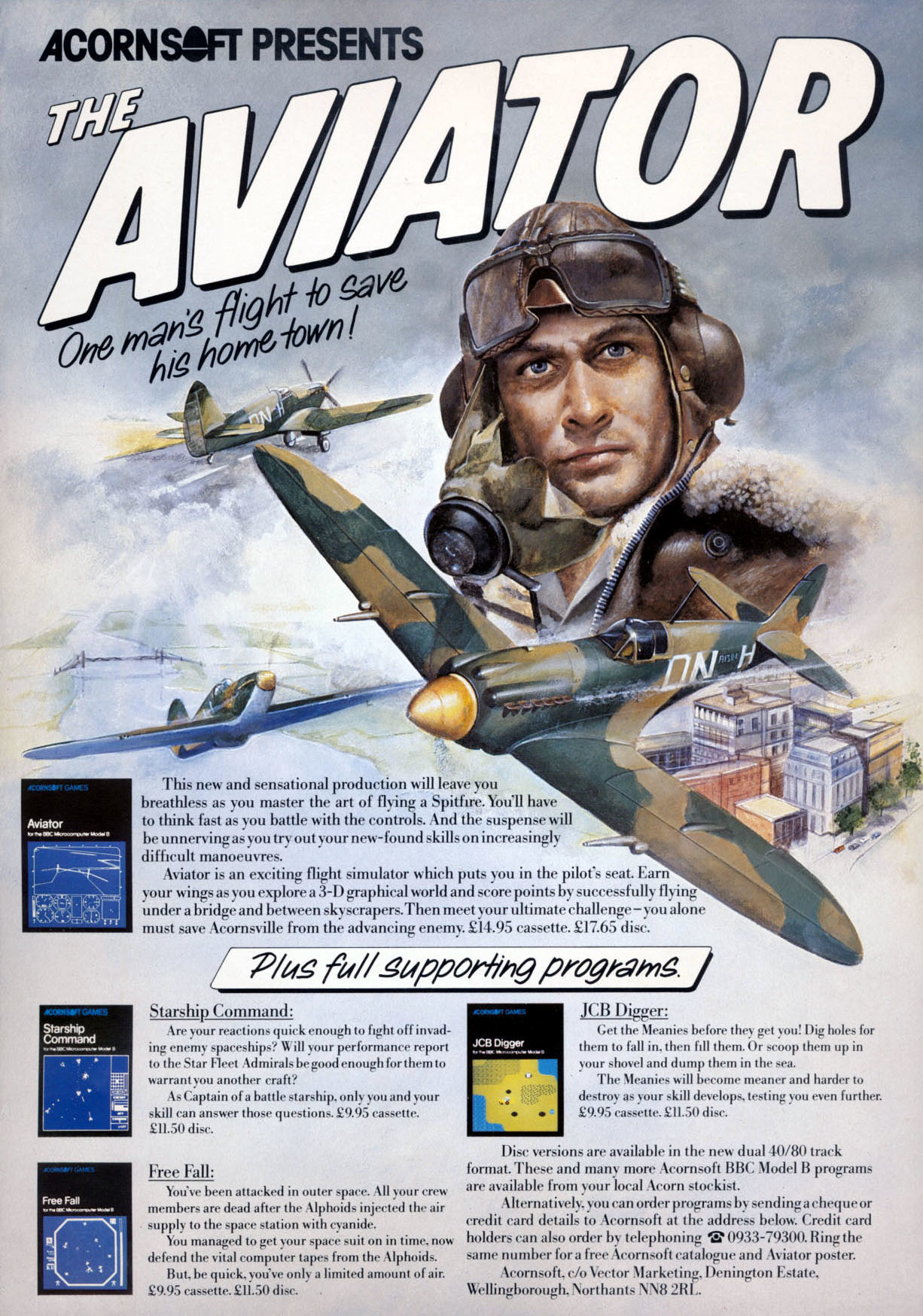 The Aviator - One man's fight to save his home town

The image above is a scan of the pre-press version of the advert and is used with permission. © Acornsoft Ltd 1985

This particular advert appeared as an A2 poster inside June 1985's Personal Computer World and came from Acorn's software offshoot Acornsoft, which produced several ground-breaking games for the BBC Micro including this - Aviator - written by Geoff Crammond as a wire-frame game based on a Spitfire, with real physics and highly-immersive game play. The aims of the game included flying under a bridge and through a city, although the latter could become a slightly confusing activity as Aviator didn't remove "hidden" lines. There was also the oddly-named and anachronistic game-within-a-game called The Theme, which involved shooting down aliens before they overwhelmed your home town of Acornsville.

Acornsoft's most famous game followed later. Elite, written by Ian Bell and David Braben, was highly-influential and, according to Sophie Wilson, one of the designers of the BBC Micro, was "the game that couldn't be written", or at least apparently not by Wilson herself.

However, the technical dexterity which saw the game use virtually every byte of free memory was not without issues, as some of the memory it used was also used by third-party Disk Filing Systems, meaning that the game wouldn't load. Acorn, as usual, was fairly unhelpful about this problem, coming across as "cold and unhelpful".

There was also displeasure in the "Cambridge circle around Acorn" when Bell and Braben decided to auction the rights to Elite to other micro manufactures, as Acorn believed it had exclusive rights. Acorn eventually calmed down and stated "we now hope to work with the authors on other versions"[1]. The game went on to sell over 1 million copies and eventually appeared on almost every other home computer platform of the day, including Spectrum, Atari ST, Amiga, Commodore 64, Apple II, MSX and the IBM PC[2]. Several follow-ups appeared, including a crowd-funded sequel called Elite: Dangerous, released in 2014[3]

Braben, who would go on to found the Raspberry Pi Foundation, had refused a regular programming job at Thorn EMI, which had been offered after he'd showed the company some 3D demos he'd written on an Acorn Atom. He returned to take up his place at Cambridge University, where he met Bell, who was working on another of the games shown in this advert. Free Fall was apparently similar enough to Braben's demos for the two to pool resources and ideas to collaborate on a game that would become Elite.

During parent Acorn's financial crises of 1985, it had been suggested that Acornsoft might be sold, along with other subsidiaries Acorn Video, IQ Bio and a 25% share in Torus Systems, in order to raise money to keep Acorn afloat. In then end, Olivetti injected yet more cash during the last week of July which increased the Italian company's holding to 79.8% and effectively completed a take-over by any other name, all of which at least meant that the sale of Acornsoft was no longer on the cards.

Meanwhile, the software tentacle of telecoms behemoth British Telecom - Firebird - found itself in a bit of hot water as it discovered that the licence it had purchased for Elite through games industry agent Jacqui Lyons, of Marjacq Micro, wasn't actually valid. As soon as Firebird started advertising the game, Acornsoft threatened legal action for intellectual-property infringement, although it eventually granted a licence based on sales royalties.

Lyons had previously been a literary editor, and it was this background that appeared to have led to the controversial auction of Elite. In an article for September 1991's The One magazine, she reported having been told that it was "an appalling way" to go about things, but reckoned that it was "absolutely standard literary procedure". She continued "against all that criticism we held the auction and were helped by Channel 4 news doing a whole item about [Elite]. We sold the rights for a very substantial sum to BT ... it had just established its software division and needed a big game to establish itself"[5].

Firebird followed up, less controversially, with non-Z80 rights to the Formula-One racing game Revs, also written by Geoff Crammond. Firebird's Herbert Wright said "It will be one of Firebird's fastest-ever projects. We will also expand the game to include Brands Hatch as well as Silverstone"[6]. Meanwhile, Elite became the first release of Firebird's New York operation Firebird Licencees Inc, when it was made available as a disk version for the Commodore 64 at $29.95[7]. 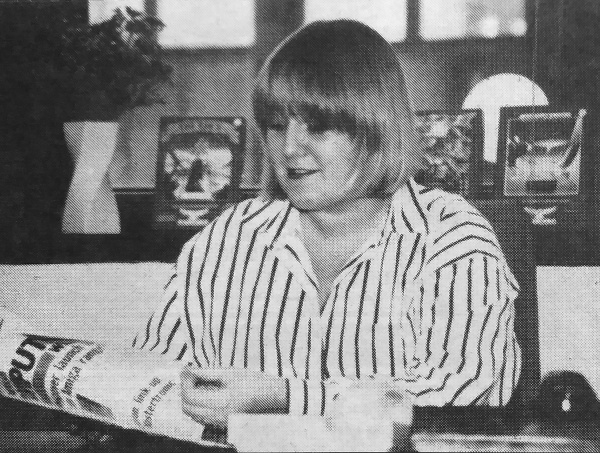 Paula Byrne, General Manager of BT's Telecomsoft, reads a copy of Popular Computing Weekly, © Popular Computing Weekly March 1989BT's various software labels - Firebird, Rainbird, and Silverbird - came under the umbrella of its Telecomsoft group, which had been set up when BT "was looking forward to the day when all games would be bought by telephone order" - a belief inspired by the company's previous experience with telesoftware on Prestel.

When this failed to actually happen, BT decided by the early spring of 1989 that entertainment software was "no longer consistent with the company's goals", according to Tom Baird of BT's Communication Systems Division[8].

A sale of the division had been on the cards for a while, but was held up for a couple of years whilst Telecomsoft got itself into better financial shape, the upshot of which was that by the end of 1988 it was turning over some £5 million. BT then approached Telecomsoft's General Manager Paula Byrne about selling the business, with Byrne interested in arranging a management buyout. However, the two parties couldn't agree terms and so, after a period where BT had agreed not to approach other buyers, Telecomsoft went onto the open market, where it was eventually acquired by MicroProse UK[9].